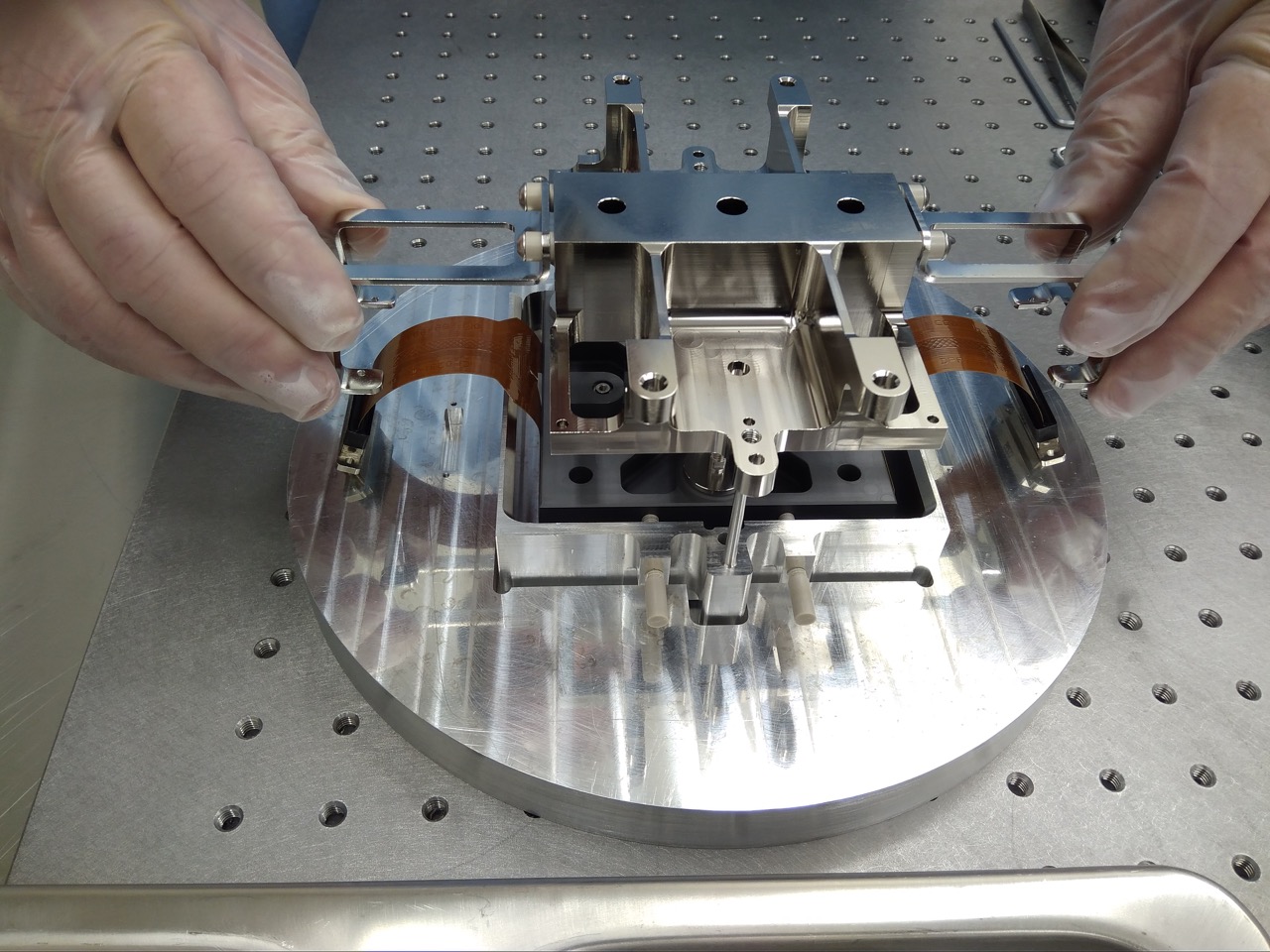 Posted at 14:47h in News by Mark Hartman

In the past week, a milestone was reached on the WiNCam (Wide-field Nasmyth Camera) instrument. This is an imaging camera system to be mounted on the new 1-m Lesedi telescope in Sutherland. It allows a wide field of imaging, 43-arcmin diameter, with a standard suite of astronomical filters. Notably, this is the largest charge-coupled device (CCD) that has ever been handled by the SAAO staff. At 6kx6k pixels, and 15 microns per pixel, the CCD is a whopping ~92 mm x 92 mm in size. For comparison, the SALTICAM and RSS CCDs are ~31 mm x 62 mm — two such CCDs are mounted together in a mosaic for SALTICAM and three for RSS. Fig. 1. Willie Koorts opening the shipping container from e2v that contains the mechanical sample for the WiNCam CCD. Fig. 2. The back side of the CCD, as it is being connected to the handling jig. The copper-colored object on either side are wiring looms containing electrical cables.

On Thursday, 06 October 2017, the mechanical sample of the WiNCam CCD was removed from its protective shipping container (Fig. 1). CCDs are very expensive, delicate hardware: typically, the science CCD is delivered along with an electrical sample (similar to the science detecter, but not necessarily science grade and used for testing electrical connections) and a mechanical sample (similar to the science detector, except electrically dead and useful for checking mechanical interfacing with the surrounding hardware). A detailed, step-by-step procedure was followed to safely disengage the mechanical CCD from the packaging , transport it to a handling jig that was designed and machined by the SAAO team (Fig. 2), and mount the mechanical sample into the cryostat housing (Fig. 3). The CCD will eventually be placed under vacuum and cooled (Fig. 4). Although the mechanical sample does not necessarily need to be treated so gently and under clean-room conditions, it is good practice to do everything the same as will be done with the much more sensitive science CCD. Fig. 3. The front face of the WiNCam CCD as it will appear when mounted in the cryostat.

Over the next many months, the Instrumentation Divison will be steadily working towards installing and testing the science CCD. Work on the other components of the instrument is also well underway, including (i) a collaboration on new CCD controller cards with SALT partner IUCAA (Inter-University Centre for Astronomy and Astrophysics), (ii) an in-house-designed, large-format shutter, (iii) a through-vacuum PCB (printed circuit board, to allow connection between the CCD in the vaccum with the outside world), (iv) machining the filter magazines (which are based on those currently operating on SALTICAM,) and (v) cabling and telescope-interfacing specifications. We expect to mount the instrument in Spring 2018. More updates will be provided as work progresses. Fig. 4. Test mounting of the CryoTel cooler, which will be used to reduce the temperature of the CCD to approximately 170K.