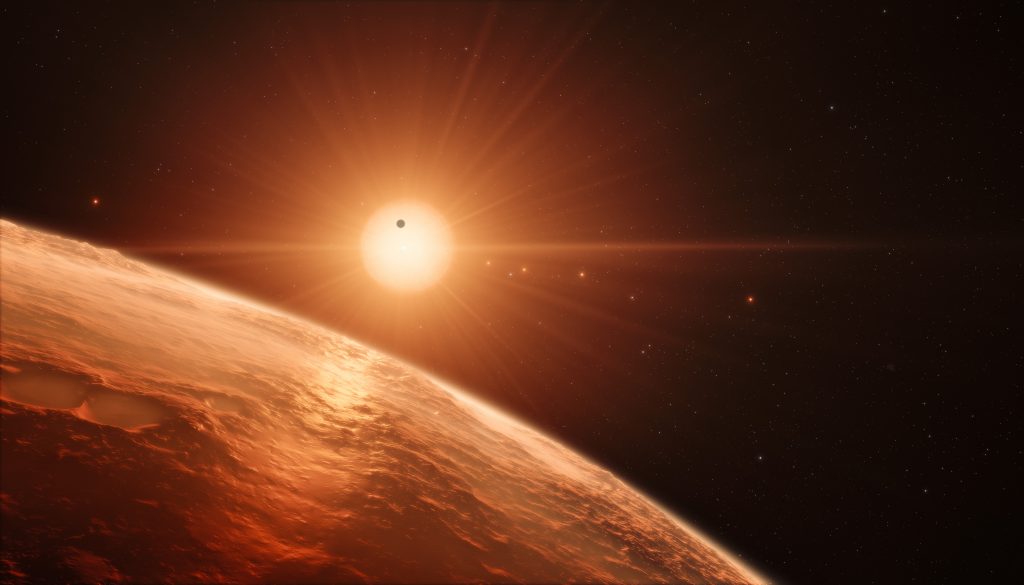 Posted at 12:59h in Press Releases by Mark Hartman

A new system of seven Earth-sized planets orbiting a star 40 light years away has been discovered using data from South African Astronomical Observatory (SAAO) telescope, as well as other instruments around the world. Three of these planets are located in the star’s “habitable zone”. This means that they could have liquid water on their surface, which increases the chances of them hosting life. This new planetary system now holds the record for the largest number of Earth-sized planets found. An artist’s impression showing the view from the surface of one of the planets in the TRAPPIST-1 system. (Credit: ESO/N. Bartmann/spaceengine.org)

SAAO’s 1m telescope was used to take observations of the planetary system over several nights in June and July 2016. The 1m telescope is equipped with a special camera, called the Sutherland High Speed Optical Camera (SHOC), which can take up to 70 images per second.

Dr. Amanda Sickafoose, Head of Instrumentation at SAAO, had this to say about SAAO’s involvement in this exciting work: ”This is a remarkable discovery. To find multiple, possibly habitable exoplanets orbiting the same star is exciting. This system is quite different from our Solar System, which also raises new questions. The SAAO is proud to have played a small role in this advancement in our understanding of planetary systems.”

Other telescopes used in this research include NASA’s Spitzer Space Telescope and ground-based telescopes in Chile, Morocco, Hawaii and the Canary Islands.

The planets were observed as they moved in front of their host star, called TRAPPIST-1, blocking out its light. By carefully measuring the amount of light blocked out as each planet passes in front of the star, astronomers were able to determine the sizes of the planets and the way in which they orbited TRAPPIST-1.

All seven planets orbit TRAPPIST-1 at a distance smaller than the orbit of Mercury, the closet planet to our Sun. The planets are able to orbit so near to TRAPPIST-1 is because it is a small, red dwarf star with temperatures much cooler than the Sun. The full details of this new discovery have been published in the journal Nature.