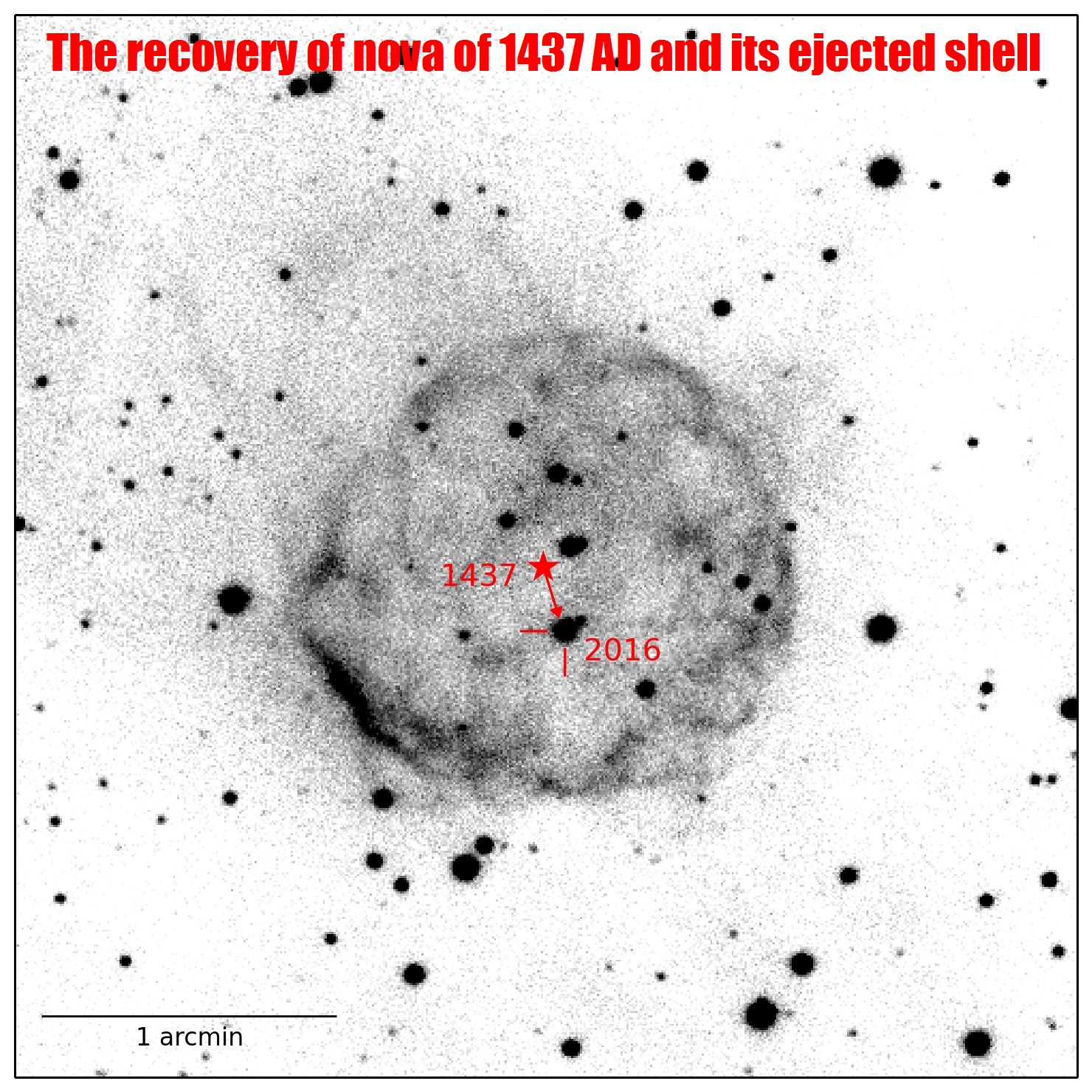 Posted at 12:58h in Press Releases by Mark Hartman

On a cold March night in Seoul almost 600 years ago, Korean astronomers spotted a bright new star in the tail of the constellation Scorpius. It was seen for just 14 days before fading from visibility. From these ancient records, modern astronomers determined that what the Royal Imperial Astronomers saw was a nova explosion, but they have been unable to find the binary star system that caused it—until now.

The new study, published in the journal Nature today, is based on observations from the Southern African Large Telescope (SALT)  and the SAAO 1-meter telescope in Sutherland, Northern Cape, as well as the Las Campanas Observatories’ Swope and Dupont telescopes in Chile. The study pinpoints the location of the old nova, which now undergoes smaller-scale “dwarf nova” eruptions. The work supports the idea that novae go through a very long-term life cycle after erupting, fading to obscurity for thousands of years and then building back up to become full-fledged novae once more. “This is the first nova that’s ever been recovered with certainty based on the Chinese, Korean, and Japanese records of almost 2,500 years,” said the study’s lead author Michael Shara, Chair of the SALT Board and a curator in the American Museum of Natural History’s Department of Astrophysics.

A nova is a colossal hydrogen bomb produced in a binary system where a star like the Sun is being cannibalized by a white dwarf—a dead star. It takes about 100,000 years for the white dwarf to build up a critical layer of hydrogen that it steals from the sun-like star, and when it does, it blows the envelope off, producing a burst of light that makes the star up to 300,000 times brighter than the sun for anywhere from a few days to a few months.

For years, Shara has tried to pinpoint the location of the binary star that produced the nova eruption in 1437, along with Durham University’s Richard Stephenson, a historian of ancient Asian astronomical records, and Liverpool John Moores University astrophysicist Mike Bode. Recently, they expanded the search field and found the ejected shell of the classical nova. They confirmed the finding with another kind of historical record: a photographic plate from 1923 taken at the Harvard Observatory station in Peru and now available online as part of the Digitizing a Sky Century at Harvard (DASCH) project.

“With this plate, we could figure out how much the star has moved in the century since the photo was taken,” Shara said. “Then we traced it back five centuries, and bingo, there it was, right at the center of our shell. That’s the clock, that’s what convinced us that it had to be right.”

Other DASCH plates from the 1940s helped reveal that the system is now a dwarf nova, indicating that so-called “cataclysmic binaries”—novae, novae-like variables, and dwarf novae—are one and the same, not separate entities as has been previously suggested. After an eruption, a Nova becomes “nova-like,” then a dwarf nova, and then, after a possible hibernation, comes back to being nova-like, and then a nova, and does it over and over again, up to 100,000 times over billions of years.

To get a better look at the present state of the binary system, Joanna Mikołajewska and Krystian Iłkiewicz, from the Copernicus Astronomical Center of the Polish Academy of Sciences, obtained several SALT spectra of the binary and the shell.  These data allowed them to identify the white dwarf companion and to determine its temperature and distance, to constrain the binary components’ masses, as well as to estimate the temperature, density and mass of the shell.

In August 2016, photometric monitoring of the system was carried out with three telescopes, and in particular, by Lisa Crause with the SAAO 1-meter telescope.  These observations revealed deep eclipses which allowed the team to very accurately derive the system’s orbital period.  In addition, the SAAO photometry (obtained over 11 days) demonstrated that the white dwarf rotates with a period of 1859 sec, the same periodicity that is present in X-ray observations.

According to Crause, “We knew from the data obtained in Chile that we were dealing with an eclipsing system, but since we didn’t know the orbital period, each night’s data from the 1-metre amounted to an additional piece of the puzzle.  After collecting light curves on several nights and putting all the data together we could work out the period – a key parameter for understanding the binary system.”

“In the same way that an egg, a caterpillar, a pupa and a butterfly are all life stages of the same organism, we now have strong support for the idea that these binaries are all the same thing seen in different phases of their lives,” Shara said. “The real challenge in understanding the evolution of these systems is that unlike watching the egg transform into the eventual butterfly, which can happen in just a month, the lifecycle of a nova is hundreds of thousands of years. We simply haven’t been around long enough to see a single complete cycle. The breakthrough was being able to reconcile the 580-year-old Korean recording of this nova event to the dwarf nova and Nova shell that we see in the sky today.”

Other authors on this study include K. Ilkiewicz, J. Mikolajewska, and K. Drozd from the Polish Academy of Sciences; Ashley Pagnotta, Jackie Faherty, and D. Zurek from the American Museum of Natural History; L.A. Crause from the South African Astronomical Observatory; I. Fuentes-Morales and C. Tappert from the Instituto de Fisica y Astronomia; J.E. Grindlay from the Harvard-Smithsonian Center for Astrophysics; A.F.J. Moffat from the Universite de Montreal; M.L. Pretorius from the South African Astronomical Observatory and the University of Cape Town; and L. Schmidtobreick from the European Southern Observatory.

Funding for this study was provided in part by the Polish NCN grant #DEC-2013/10/M/ST9/00086, the National Sciences and Engineering Research Council of Canada, FQRNT (Quebec), and the American Museum of Natural History’s Kathryn W. Davis Postdoctoral Scholar program, which is supported in part by the New York State Education Department and by the National Science Foundation under grant #s DRL-1119444 and DUE-1340006.