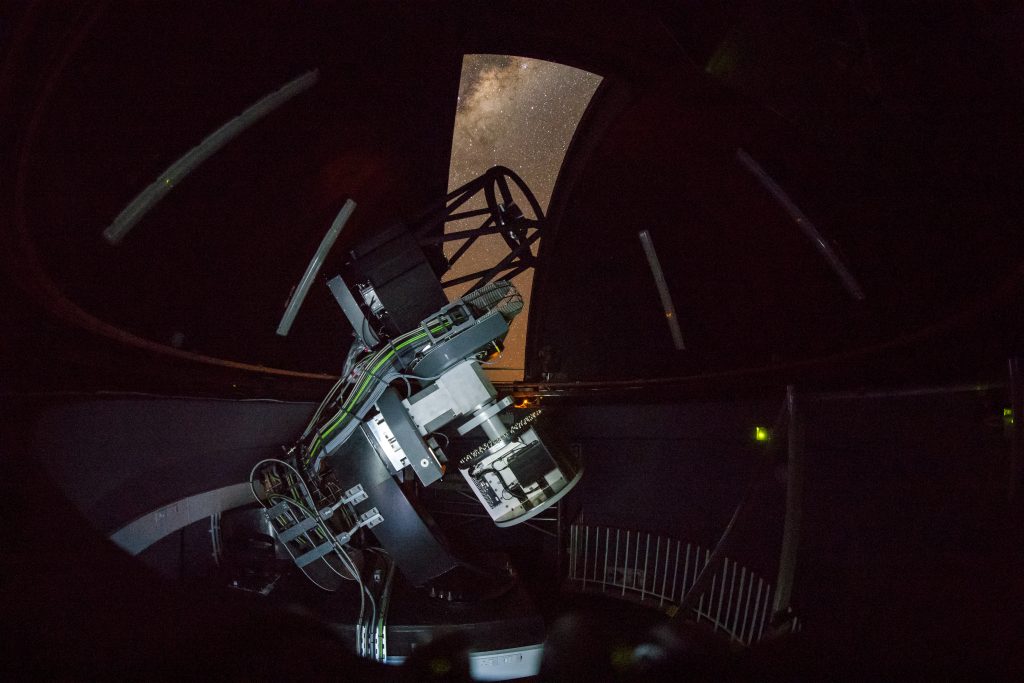 25 May Inauguration of the MeerLICHT telescope

Posted at 13:35h in News by Mark Hartman

On Friday May 25 – Africa Day 2018 – a new telescope has been inaugurated at the South African Astronomical Observatory (SAAO), near Sutherland, that will be an “eye of the MeerKAT radio array”, the country’s precursor to the Square Kilometre Array (SKA) MeerLICHT is a wide-field, fully robotic 0.65-m optical telescope, located at the Sutherland station of the South African Astronomical Observatory in the Northern Cape province in South Africa. This is one of the darkest astronomical sites in the world. By exclusively linking MeerLICHT to MeerKAT, the telescope will, for the first time ever, provide optical multi-band observations of every night-time observation conducted by a radio telescope.

MeerLICHT, which means “more light” in Dutch, is an optical telescope that will simultaneously scan the Southern Skies together with MeerKAT. This creates a truly unique combination where astronomers will always be studying stars and galaxies in two parts of the spectrum at the same time.

The project is a Dutch – South African – United Kingdom collaboration involving researchers from six different institutes from the respective partner countries. It was decided to launch it on Africa Day to recognise and celebrate both our incredible African skies and the important partnerships between Europe and Africa that have led to this innovation.

MeerLICHT is a good example of projects aligned to the objective of the Multi-wavelength Astronomy (MWA) strategy, which was approved by the Department of Science and Technology (DST) in 2015.

The aim of the MWA strategy is to forge closer ties between radio, optical and gamma-ray astronomy communities and facilities to work together to achieve common scientific objectives and develop human capital.

Speaking at the inauguration of the telescope on Friday, the DST Director-General, Dr Phil Mjwara, said South Africa had chosen astronomy as the field of science to show its abilities in research on a global scale, to bolster technological development in the fields of telecommunication, Big Data and large-scale computing, and as the field best able to bring science to the people.

“MeerLICHT is also foreseen to play an important role in the astronomical education of people in southern Africa. The project team also hopes that the MeerLICHT project can grow into a stepping stone to allow other southern African countries to share in humanity’s fascination of the night sky,’ said Dr Mjwara.

Among the chief scientific goals of MeerLICHT is the study of stellar explosions, which need to be investigated intensely before they fade away again. “The study of exploding stars across the Universe will gain a whole new dimension”, states University of Cape Town Prof. Patrick Woudt, co-principal investigator of the MeerLICHT telescope.

The MeerLICHT telescope was purpose-built to combine excellent resolution with a wide field of view. It sees more than 13x the Full Moon while being able to see objects one million times fainter than is possible with the naked eye.

The telescope achieves this amazing combination by coupling a 65cm diameter main mirror with a single 100 megapixel detector, which is a full 10cm x 10cm in size. This camera uses the largest single detector used in optical astronomy anywhere in the world. The telescope was designed and built in the Netherlands, and then shipped to South Africa.

“We started work on the technical definition of this telescope back in 2012, and it is fantastic to see what amazing views it produces”, adds Radboud University Prof. Paul Groot, co-principal investigator.

The link with the MeerKAT radio array has astronomers across the world excited about the new combination. “For us, it was the reason to join this consortium. Flashes of radio emission known as Fast Radio Bursts may now be ‘caught in the act’ by both MeerKAT and MeerLICHT”, explains University of Manchester’s Prof. Ben Stappers, MeerLICHT collaborator, and leader of the MeerTRAP project.  “ Hopefully we can finally determine the origin of these enigmatic flashes”.

Prof. Rob Fender, of the Universities of Oxford and Cape Town, co-principal investigator of the telescope, was excited about the inauguration and beginning of operations of the telescope. “This is the beginning of a new phase of coordinated multi-wavelength research into the most extreme astrophysical events” , he said.

“Besides extreme astrophysics, typically associated with black holes and neutron stars, we will also study normal stars, in particular those that produce strong flares” adds Prof. Rudy Wijnands of the University of Amsterdam, “The simultaneous optical-radio monitoring of these stars will allow us to investigate the impact of such flares on the habitability of the planets around them.”