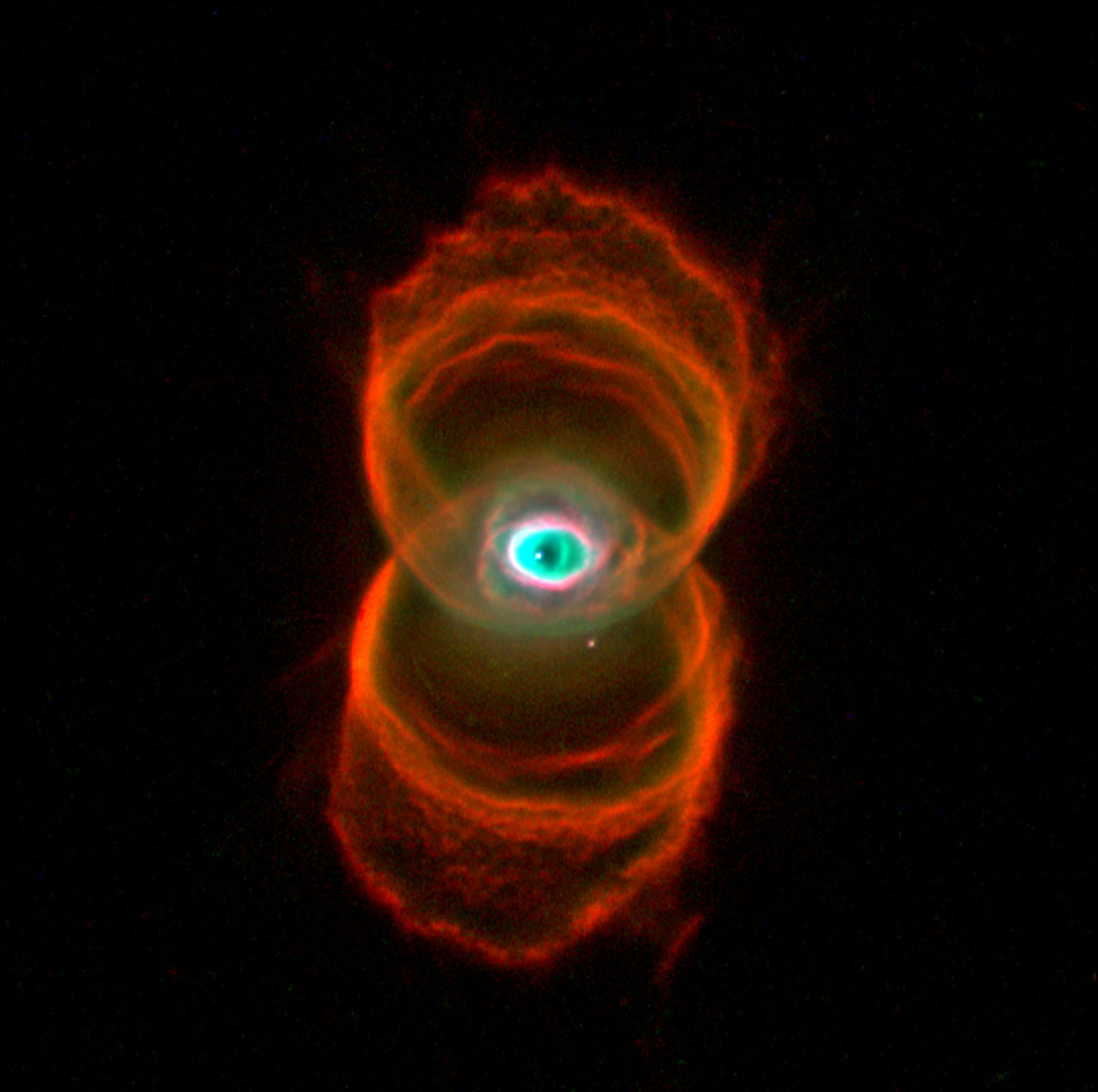 28 May SALT sees double in The Hourglass Nebula

Posted at 12:30h in Press Releases by Mark Hartman

The Southern African Large Telescope (SALT) at the South African Astronomical Observatory (SAAO) in Sutherland has discovered a binary star system in The Hourglass Nebula, one of the most famous nebulae captured by the Hubble Space Telescope. The Hourglass Nebula as viewed by the Hubble Space Telescope in the light of ionized nitrogen (represented by red), hydrogen (green), and doubly-ionized oxygen (blue). A remarkable new SALT discovery has proven the ionizing star to be a binary system.

The Hourglass Nebula consists of two hourglass-shaped lobes of gas and what appears to be an eye staring right back at us. Shells of gas form the eye surrounding the hot central star that illuminates the nebula like a neon sign. Astronomers have long suspected the peculiar nebula to be formed by two interacting stars in a binary system, but until now no one could prove it. The SALT discovery of two stars orbiting each other every 18.15 days in The Hourglass Nebula firmly settles the matter and gives new insights into how a wide variety of close binary stars and hourglass-shaped nebulae may form.

An international team of astronomers, led by SALT Astronomer Dr Brent Miszalski at the SAAO, used SALT to peer into the “sparkle” of the eye of the Hourglass Nebula – its central star.

Dr Miszalski says, “A total of 26 SALT measurements were taken that detected the small movements of the central star towards or away from us caused by the gravity of a second companion star. This Doppler or “wobble” method, that can also be used to find planets around other stars, revealed a hidden companion orbiting the central star every 18.15 days.”

Co-author of the study, Mr Rajeev Manick, formerly a Masters student at SAAO and The University of Cape Town, and now completing his PhD at The Katholieke Universiteit Leuven in Belgium, analysed the SALT measurements and found that the companion must be a small, cool star about 5 times lighter than the Sun.

Another surprise came with the binary – the relatively wide separation between the two stars is remarkable. Co-author Professor Joanna Mikołajewska of the Nicolaus Copernicus Astronomical Center in Warsaw, Poland, a major partner in SALT, Prof. Mikołajewska says, “Previous authors have suggested that a nova explosion could explain many aspects of The Hourglass Nebula, but curiously we found the stars were too far apart for this to have ever been possible.”

Instead of a nova explosion, the orbital period indicates the Hourglass Nebula formed through an interaction that many close binary stars experience – a so-called common-envelope stage. In this scenario, the cooler companion spirals into the atmosphere of its larger companion and helps ejects the shared atmosphere which we now see as the nebula. The Hourglass Nebula is one of very few such examples to show an orbital period above 10 days, making it helpful to improve our understanding of this brief phase that many types of binary stars experience during their lifetime. The new SALT discovery may help astronomers understand how a wide variety of other hourglass-shaped or butterfly-shaped nebulae form. The picture shows several examples of such nebulae captured by the Hubble Space Telescope, with The Hourglass Nebula visible at the lower left corner. Image Credit: ESA/Hubble.

While astronomers still do not quite understand how hourglass-shaped nebulae form, the discovery of a binary in The Hourglass Nebula considerably strengthens the long suspected, but difficult to prove, connection between binary stars and hourglass-shaped nebulae. A famous example is the nebular remnant of Supernova 1987A that is often compared against The Hourglass Nebula because of its very similar shape. It is thought to have resulted from the merger of two massive stars before the supernova event. This process shares similarities with that which formed The Hourglass Nebula, hinting at some shared physics resulting in two of the most unusual nebulae in the sky.

Dr Miszalski says, “The combination of SALT’s enormous 11-metre mirror, highly sensitive instrumentation and flexible queue-scheduled operations was fundamental to making this difficult, cutting-edge discovery. We will continue searching other nebulae for new binary systems to gain more insights into their complex origins.”

The study entitled “SALT HRS discovery of the binary nucleus of the Etched Hourglass Nebula MyCn 18” was recently accepted for publication in the Publications of the Astronomical Society of Australia (PASA) journal and is available from https://arxiv.org/abs/1805.07602. The work is the result of a collaboration between astronomers at SAAO and SALT in South Africa, the Nicolaus Copernicus Astronomical Center in Poland, and The Katholieke Universiteit Leuven in Belgium.

The Hourglass Nebula was discovered by Margaret Walton Mayall and Annie Jump Cannon from photographs taken during 1938-1939 with telescopes located in Bloemfontein, South Africa. Its enigmatic beauty was only revealed much later by the Hubble Space Telescope in 1995 and soon drew widespread attention amongst the wider public, gracing the covers of the April 1997 issue of National Geographic and Pearl Jam’s 2000 album Binaural (Fig. 1). Now in 2018, the Southern African Large Telescope has finally proved the long suspected binary nature of its central star.