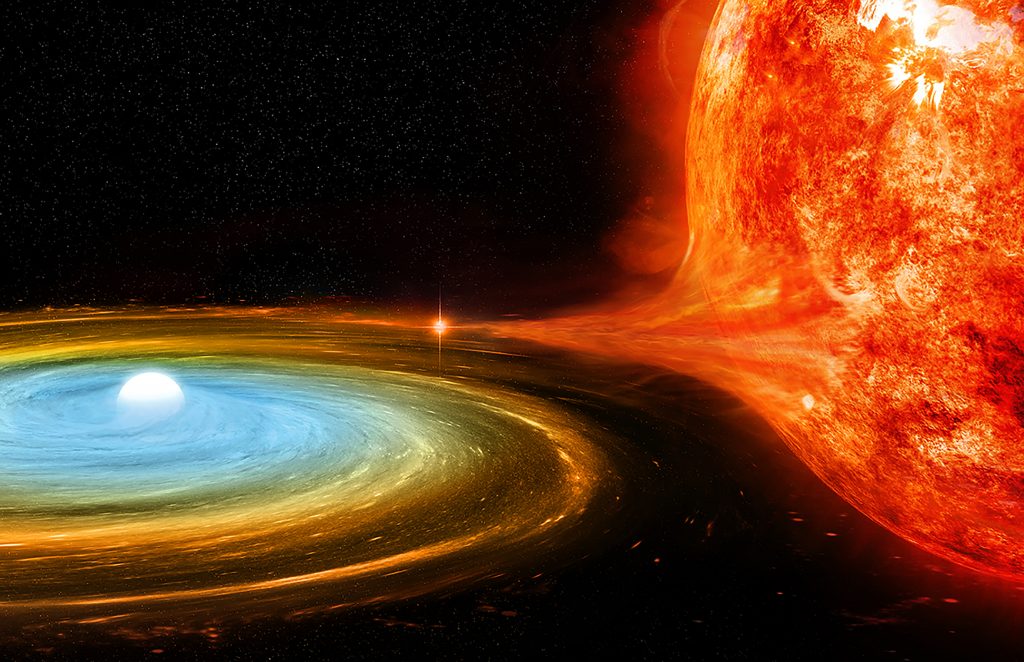 Posted at 12:51h in Press Releases by Mark Hartman

A new binary star system has been discovered in which a small white dwarf star is cannibalising its larger Sun-like companion. Such objects are actually quite common, but for this new object, the white dwarf binged on its neighbour at a prodigious rate, heating part of it to nearly a million degrees. The object, named ASASSN-16oh, was found on 2 December 2016 by the All-Sky Automated Survey for Supernovae (ASASSN), a network of about 20 optical cameras distributed around the globe which automatically surveys the entire sky every night in search of transient events, objects which suddenly appear. ASASSN-16oh was found to be in the Milky Way’s satellite galaxy, the Small Magellanic Cloud, at a distance of ~200,000 light years. An artist’s impression of the supersoft X-ray binary system, ASASSN-16oh, with a small white dwarf star (left) accreting hot gas from its Sun-like companion (right), through an accretion disk. The stream of gas from the companion forms a flattened accretion disk and the gas gradually spirals down to the white dwarf, getting hotter as it does so. Eventually, the accreted gas impacts the equator of the white dwarf, heating it up to nearly a million degrees, emitting in soft X-rays. Image credit: NASA/CXC/M.Weiss

Optical follow-up observations were conducted by the Southern African Large Telescope (SALT), the Polish OGLE telescope in Chile and the Las Cumbres Observatory (LCO) telescope network. It was also discovered to be a so-called “supersoft” X-ray source by the NASA Neil Gehrels Swift Observatory and the Chandra X-ray Observatory, produced by gas at temperatures of ~900,000 degrees. Such supersoft systems have previously always been associated with a thermonuclear runaway explosion on the surface of a white dwarf, as occurs in a hydrogen bomb, brought on by the accumulation of hot and dense accreted gas which eventually reaches a critical explosive limit.

“Supersoft sources are a really interesting class of transient events, and ASASSN-16oh is no exception”, says David Buckley, the Principal Investigator of the SALT Large Science Programme on transients, who is based at the South African Astronomical Observatory. “We were fortunate to be able to react quickly to its discovery and undertake crucial observations during the outburst phase”, he said. “Our SALT spectra showed all the hallmarks of a highly energetic system, with an intensely strong emission line from ionized helium which changed in velocity from night-to-night”, says Buckley. In addition, robotic observations were triggered with the LCO telescopes in South Africa, Chile and Australia, allowing for monitoring over a 34 hour period, beginning on Christmas Day 2016. “A nice Christmas present courtesy of the LCO Director who granted the time”, quipped Buckley. The SALT and LCO data were then quickly analysed by another member of the SALT transients collaboration, Andry Rajoelimanana, at the University of the Free State, in Bloemfontein, South Africa.

It became clear after the optical and X-ray observations were analyzed that ASASSN-16oh was no normal thermonuclear powered supersoft source. “In the past, the supersoft sources have all been associated with nuclear burning on the surface of white dwarfs,” said lead author Tom Maccarone, a professor in the Texas Tech Department of Physics & Astronomy, lead author of the ASASSN-16oh discovery paper that has just appeared in the December 3rd issue of Nature Astronomy.

If nuclear fusion is the cause of the supersoft X-rays from ASASSN-16oh then it should begin with an explosion and the emission should come from the entire surface of the white dwarf. However, the optical light does not increase quickly enough to be caused by an explosion and the Chandra X-ray data show that the emission is coming from a region smaller than the surface area of the white dwarf. The source is also a hundred times fainter in optical light than white dwarfs known to be undergoing fusion on their surface. These observations, plus the lack of evidence for gas expelled away from the white dwarf, provide strong arguments against fusion having taken place on the white dwarf.

Because no signs of nuclear fusion are present, the authors present a different scenario. As with the fusion explanation, the white dwarf pulls gas from its companion star, a red giant, in a process called disk accretion. The gas forms a large flattened rotating disk surrounding the white dwarf, becoming hotter as it spirals inwards, as shown in our illustration. The gas then falls onto the white dwarf, producing X-rays along an equatorial belt where the disk meets the star. The rate of inflow of matter through the disk varies by a large amount and when the rate of mass loss from the companion increases, the X-ray and optical brightness of the system becomes much higher.

“The transfer of mass is happening at a higher rate than in any system we’ve caught in the past,” added Maccarone. If the white dwarf keeps gaining mass it may reach a mass limit and destroy itself in a Type Ia supernova explosion, a type of event which was used to discover that the expansion of the universe is accelerating. The team’s analysis suggests that the white dwarf is already unusually massive, so ASASSN-16oh may be relatively close – in astronomical terms – to exploding as a supernova.

“Our result contradicts a decades-long consensus about how supersoft X-ray emission from white dwarfs is produced,” said co-author Thomas Nelson from the University of Pittsburgh. “We now know that the X-ray emission can be made in two different ways: by nuclear fusion or by the accretion of matter from a companion.”