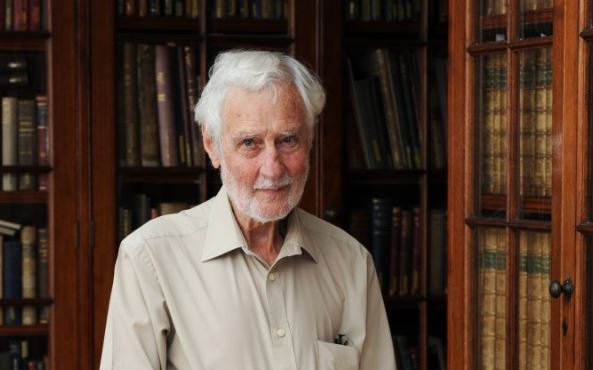 Posted at 13:09h in News by Mark Hartman Born and raised in England, as a young boy he was removed from his family in the south of England, and with the other village children, was sent to live with host families in Wales for the duration of the war for security reasons.

He came to South Africa in 1952, after a postdoc position in Canada, to work at the Radcliffe Observatory in Pretoria. In 1974, he moved the SAAO in Cape Town, where he served as director from 1976 to 1992.  In 1992, he took South African nationality so as to participate fully in the transformation of South Africa.  He was passionate about astronomy and continued to do research up to a few months before his death. He read widely, enjoyed talking to students and was an editor of the leading UK astronomy journal, Monthly Notices of the Royal Astronomical Society, from 1993 until 2018.

Using the 1.9m telescope, first in Pretoria and later at Sutherland, Michael did pioneering work on the Magellanic Clouds, our nearest extragalactic neighbours. His measurements enabled the first estimate of the mass of the Large Magellanic Cloud, which allowed us to understand how it was formed. He also established that the history of the Small Cloud must have been quite different. Many of his papers from the 1950s and 60s continue to be quoted. He established that luminous stars were losing mass and that this set a limit to stellar masses, which is crucial to many things from stellar evolution to the formation of planets.

Michael has also made major contributions to the understanding of our own Milky Way Galaxy. A pioneer of multi-wavelength techniques, between 1958 and 1965 he made the first comparison of optical data on young stars with radio measurements of the hydrogen gas. These led him to a new determination of the distance to the Galactic centre and an improved understanding of Galactic rotation. Much more recently, from 1997 to 2015, he combined data from the Hipparcos Satellite with observations from the Hubble Space Telescope and from various the SAAO telescopes at Sutherland to investigate the structure of our own galaxy and to derive a new calibration of the extragalactic distance scale. He has also used the Southern African Large Telescope (SALT) to good effect, discovering Cepheid variables at large distance behind the Galactic Centre. He published over 300 refereed papers, the first in 1948 and the latest in 2019.

At the time of his death, Michael was a National Research Foundation (NRF) A1 rated researcher. He had won the Gill Medal of the Astronomical Society of South Africa, the de Beers Gold Medal of the SAIP and in 2014 was presented with the NRF Lifetime Achievement award.

He was responsible for the development of the SAAO as a major national and international facility. Initially a joint enterprise with the British Science Research Council, this developed into an entirely South African operation under his leadership. The telescope time was available to anyone who had a good enough project and this attracted international visitors.  This also led to fruitful exchanges of scientific and technical knowledge and was highly stimulating to the SAAO staff, both scientific and technical.  He took a strong personal interest in all research done at the SAAO and critically read every paper written by a staff member before it was submitted for publication. He encouraged international collaborations and insisted that publication was in first rank international journals.

The Department of Science and Technology’s Director-General, Dr. Phil Mjwara, said the former director of the South African Astronomical Observatory (SAAO) will always be remembered for the role he played in promoting astronomy in South Africa.

“The work carried out at the SAAO by staff and by astronomers from South African and international universities and institutions during the time of Michael’s directorship of the SAAO has not only led to the recognition of South Africa as a major component in world astronomy, it has shown that South Africa’s geography, climate and its technical development makes it an excellent place to establish astronomical facilities,” said, Dr. Mjwara.

“It is clear that these factors were significant in convincing international partners to join with South Africa in SALT at the SAAO, Sutherland. That in turn positioned South Africa to bid to host the Square Kilometre Array,” he concluded.

When the SAAO and UCT held a conference to celebrate Michael’s 90th birthday he insisted that it must not look back, but focus on the future and the wonderful opportunities that astronomy and South Africa offered each other.   He lived a life of integrity and dedication to work, whilst still enjoying the simple pleasures of family dinners, listening to music, reading poetry, and walking deep in conversation with friends. He read widely on a broad range of subjects, especially history, art, music, philosophy and religion. He was an Anglican and was especially interested in what lay beyond and outside of the concepts of space and time as we know them. He was a source of wisdom and good council to many who loved him, and an inspiration and help too many who worked with him. His is a life worth celebrating in so many ways.

A service will be held at St Michael’s Church, Observatory on Friday 5th April 10:30