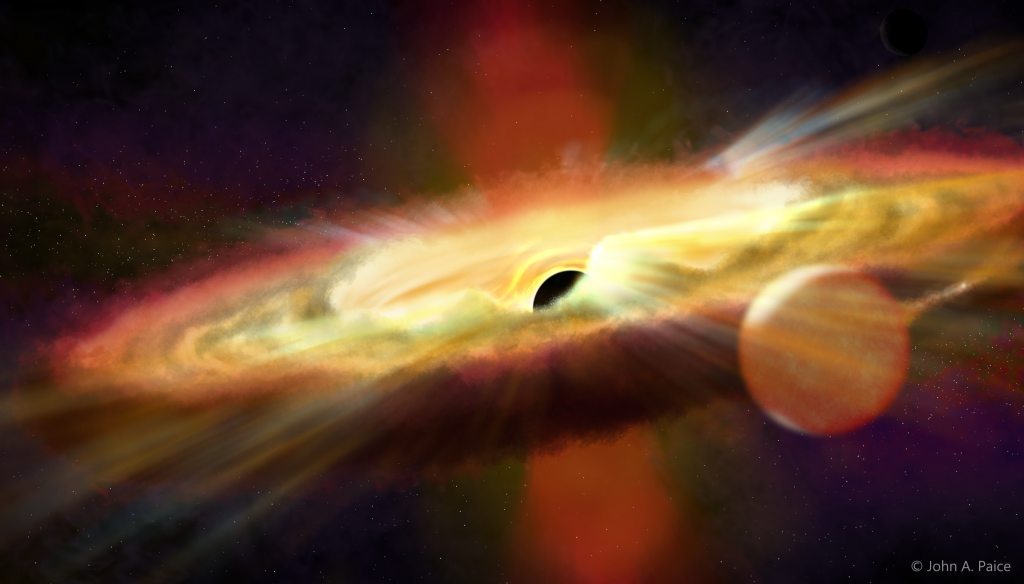 Posted at 12:13h in Press Releases by Mark Hartman

An international team of astrophysicists from Southampton, Oxford and South Africa have detected a very hot, dense outflowing wind close to a black hole at least 25,000 light-years from Earth.

Lead researcher Professor Phil Charles from the University of Southampton explained that the gas (ionised helium and hydrogen) was emitted in bursts which repeated every 8 mins, the first time this behaviour has been seen around a black hole. The findings have been published in the journal Monthly Notices of the Royal Astronomical Society.

The object Professor Charles’ team studied was Swift J1357.2-0933 which was first discovered as an X-ray transient – a system that exhibits violent outbursts – in 2011. These transients all consist of a low-mass star, similar to our Sun and a compact object, which can be a white dwarf, neutron star or black hole. In this case, Swift J1357.2-0933 has a black hole compact object which is at least 6 times the mass of our Sun.

Material from the normal star is pulled by the compact object into a disc in between the two. Massive outbursts occur when the material in the disc becomes hot and unstable and it releases copious amounts of energy. Professor Charles said: “What was particularly unusual about this system was that ground-based telescopes had revealed that its optical brightness displayed periodic dips in its output and that the period of these dips slowly changed from around 2 mins to about 10 mins as the outburst evolved. Such strange behaviour has never been seen in any other object.

“The cause of these remarkable, fast dips has been a hot topic of scientific debate ever since their discovery. So it was with great excitement that astronomers greeted the second outburst of this object in mid-2017, presenting an opportunity to study this strange behaviour in greater detail.”

Professor Charles and his team recognised that key to getting the answer was to obtain optical spectra a number of times during each dip cycle, essentially studying how their colour changed with time. But with the object about 10,000 times fainter than the faintest star visible to the naked eye and the dip period of only around 8 minutes, a very big telescope had to be used.

So, they used SALT, the Southern African Large Telescope, the largest optical telescope in the southern hemisphere.

The University of Southampton is one of the founding UK partners in SALT, and together with their South African collaborators, are part of a multi-partner Large Science Programme to study transients of all types. Not only does SALT have the necessary huge collecting area (it has a 10m diameter mirror), but it is operated in a 100% queue-scheduled way by resident staff astronomers, meaning that it can readily respond to unpredictable transient events. This was perfect for Swift J1357.2-0933, and SALT obtained more than an hour of spectra, with one taken every 100 secs.

“Our timely observations of this fascinating system demonstrates how the quick response of SALT, through its flexible queue-scheduled operation, makes it an ideal facility for follow-up studies of transient objects”, said Dr David Buckley, the Principal Investigator of the SALT transient programme, based at the South African Astronomical Observatory, who also added, “With the instantaneous availability of a number of different instruments on SALT, we can also dynamically modify our observing plans to suit the science goals and react to results, almost in real-time”

Professor Charles added: “The results from these spectra were stunning. They showed ionised helium in absorption, which had never been seen in such systems before. This indicated that it must be both dense and hot – around 40,000 degrees. More remarkably, the spectral features were blue-shifted (due to the Doppler effect), indicating that they were blowing towards us at about 600km/s. But what really astonished us was the discovery that these spectral features were visible only during the optical dips in the light-curve. We have interpreted this quite unique property as due to a warp or ripple in the inner accretion disc that orbits the black hole on the dipping timescale. This warp is very close to the black hole at just 1/10 the radius of the disc.”

What is driving this matter away from the black hole? It is almost certainly the radiation pressure of the intense X-rays generated close to the black hole. But it has to be much brighter than we see directly, suggesting that the material falling on to the black hole obscures it from direct view, like clouds obscuring the Sun. This occurs because we happen to be viewing the binary system from a vantage point where the disc appears edge-on, as depicted in the schematic illustration, and rotating blobs in this disc obscure our view of the central black hole.

Interestingly there are no eclipses by the companion star seen in either the optical or X-ray as might be expected. This is explained by it being very small, and constantly in the shadow of the disc. This inference comes from detailed theoretical modelling of winds being blown off accretion discs that was undertaken by one of the team, James Matthews at the University of Oxford, using supercomputer calculations.

This object has remarkable properties amongst an already interesting group of objects that have much to teach us about the end-points of stellar evolution and the formation of compact objects. We already know of a couple of dozen black hole binary systems in our Galaxy, which all have masses in the 5-15 solar mass range, and the single black hole at our Galactic Centre is around 4 million solar masses. They all grow by the accretion of matter that we have witnessed so spectacularly in this object. We also know that a substantial fraction of the accreting material is being blown away. When that happens from the supermassive black holes at the centres of galaxies, those powerful winds and jets can have a huge impact on the rest of the galaxy.

These short-period binary versions are a perfect way to study this physics in action.

2. The attached image produced by John Paice a graduate student at the University of Southampton and the Inter-University Centre for Astronomy & Astrophysics in Pune, India, with support from a UKIERI (UK-India) grant.

3. This study is to be published in Monthly Notices of the Royal Astronomical Society as a Letter to the Editor, authored by Phil Charles (University of Southampton), James H. Matthews (University of Oxford), David A.H. Buckley (South African Astronomical Observatory; SAAO), Poshak Gandhi (Southampton), Enrico Kotze (SAAO and South African Large Telescope), and John A. Paice (Southampton and Inter-University Centre for Astronomy and Astrophysics). This work was supported by the South African National Research Foundation, the Leverhulme Trust, STFC, and a UGC-UKIERI Thematic Partnership.

4. Founded in 1820, the South African Astronomical Observatory (SAAO; www.saao.ac.za) is the national centre for optical and infrared astronomy in South Africa. Its primary role is to conduct fundamental research in astronomy and astrophysics by providing a world-class facility to scientists. The SAAO also promotes astronomy and astrophysics in Southern Africa, by sharing research findings and discoveries, and participating in outreach activities to enthuse citizens about physics and astronomy. The SAAO is a facility of the National Research Foundation, which operates under the South African Department of Science and Technology. The SAAO encompasses headquarters in the eponymous suburb of Observatory in Cape Town, and a dedicated research and observation station with several working telescopes (including SALT; www.salt.ac.za) outside the Karoo town of Sutherland in the Northern Cape.

5. The University of Southampton drives original thinking, turns knowledge into action and impact, and creates solutions to the world’s challenges. We are among the top 100 institutions globally (QS World University Rankings 2019). Our academics are leaders in their fields, forging links with high-profile international businesses and organisations, and inspiring a 24,000-strong community of exceptional students, from over 135 countries worldwide. Through our high-quality education, the University helps students on a journey of discovery to realise their potential and join our global network of over 200,000 alumni. www.southampton.ac.uk

6. The Royal Astronomical Society (RAS, www.ras.ac.uk), founded in 1820, encourages and promotes the study of astronomy, solar-system science, geophysics and closely related branches of science. The RAS organises scientific meetings, publishes international research and review journals, recognises outstanding achievements by the award of medals and prizes, maintains an extensive library, supports education through grants and outreach activities and represents UK astronomy nationally and internationally. Its more than 4,000 members (Fellows), a third based overseas, include scientific researchers in universities, observatories and laboratories as well as historians of astronomy and others. The RAS accepts papers for its journals based on the principle of peer review, in which fellow experts on the editorial boards accept the paper as worth considering. The Society issues press releases based on a similar principle, but the organisations and scientists concerned have overall responsibility for their content.