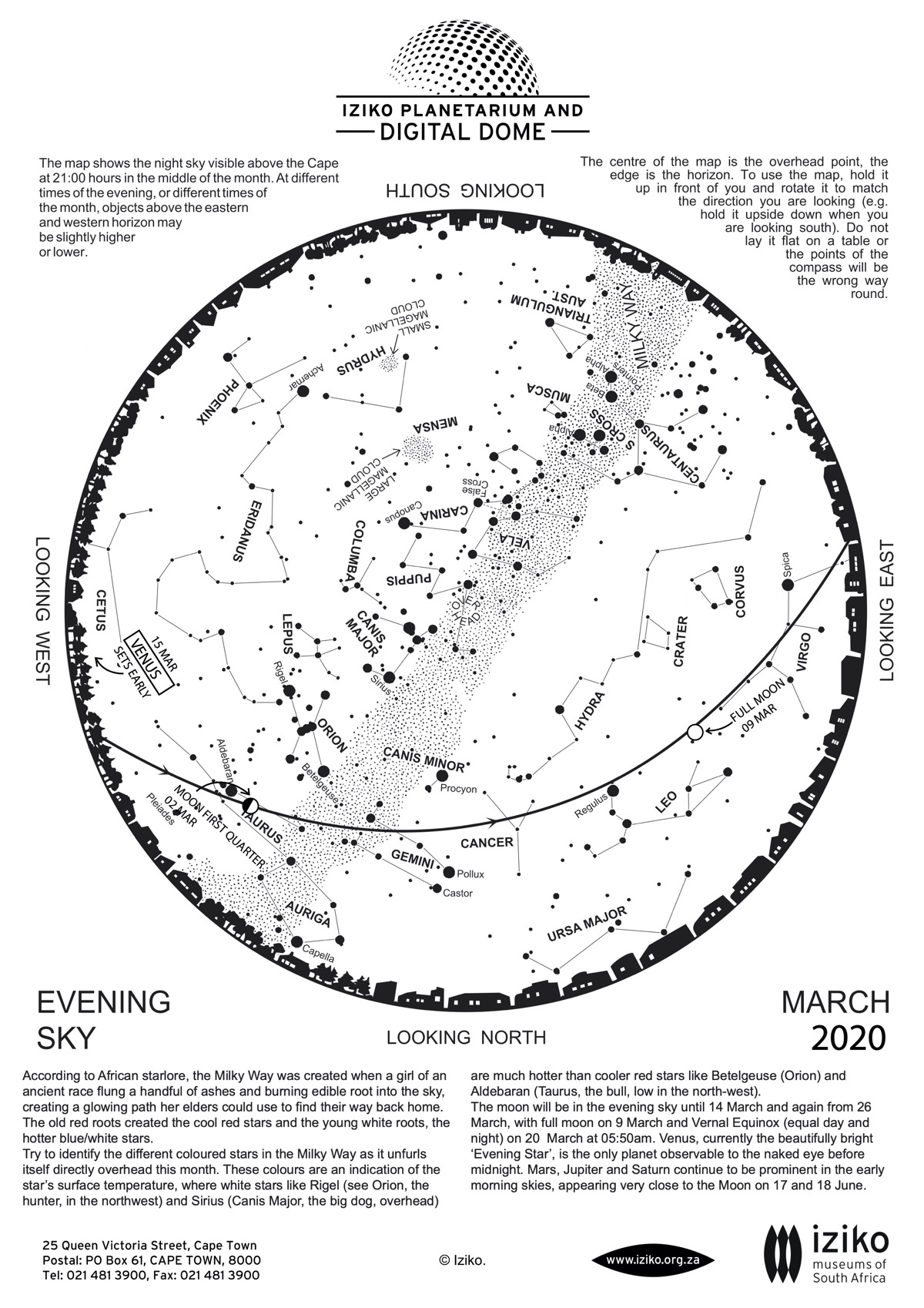 Posted at 22:31h in WhatsUp by Christian Hettlage

Venus still shines brightly as the Evening Star and is located near the stars of the constellation, Taurus, Venus will be amongst the Pleiades on the 3rd of April and will be near the Moon on the 26th of April.

The Evening Sky Stars
The bright stars near the summer Milky Way are still prominent in the sky in April evenings, but are further to the west than in March. Stars rise about 2 hours earlier and set about 2 hours earlier than they did on the same day of the previous month — our point of view keeps changing as Earth goes around the Sun. The Milky Way gets more and more impressive as the night progresses, as the centre of our galaxy rises in the east and eventually passes overhead before dawn.

Orion can still be seen in the NW in early evening, with Taurus the Bull charging at him from low in the NW. Since Orion is upside down for us in the southern hemisphere, we see Sirius (brightest star in the sky and the eye of Orion’s Large Dog) ‘above’ Orion, with the dim stars of the Hare just above Orion’s feet. Between Orion and the stars of Leo the Lion (rising in the NE in early evening) are the dim stars of the Unicorn and the Crab, with Procyon (brightest star in Orion’s Small Dog) between them, while below Procyon are the ‘Twin’ stars Castor and Pollux low in the NNW.

In the NNE at the end of evening twilight is the upside-down question mark of Leo the Lion, representing the Lion’s head and mane. Brightest of Leo’s stars is Regulus, the ‘prince’ and one of the four ‘royal stars’, Second-brightest among Leo’s stars is Denebola (‘tail of the lion’), well to the east (right, for an observer facing north) of the ‘question mark’. According to Egyptian legend, the sun was in Leo immediately after the Creation, near Denebola. On a more scientific note, Denebola is about 36 light years away, and 12 times as bright as our sun. The dust clouds around this star suggest that planets may have formed around it, but none have been detected yet.

To the south of Sirius, and nearly overhead, is Canopus, second brightest star in the sky, lighting the keel of the great ship Argo. If they were at the same distance, Canopus would appear far brighter than Sirius. Canopus is 15000 times as luminous as the sun, a rare yellow-white supergiant 313 light years away. If placed at the center of our solar system, its surface would be three quarters of the distance from the centre to the orbit of Mercury, Earth would be global toast, and so would we.

Rising in the southeast in April evenings are the stars of the Southern Cross and the Pointers (Alpha and Beta Centauri). The Alpha Centauri seen by the eye as a single bright star is easily separated by a small telescope into a brilliant pair of yellow stars, Alpha Centauri A and B. The brighter one is about half again as bright as our sun, the fainter about half as bright as the sun. Separated by about 23 times the distance from the Earth to the sun, they take 80 years to orbit each other. For many years it was believed that these were the two nearest stars to our own sun. But a third star also appears to be a member of the Alpha Centauri system, and is slightly closer to us (4.22 vs. 4.35 light years). This star, ‘Proxima Centauri’, was discovered in 1915 by Robert Innes of the Union Observatory in Johannesburg. It’s about 1/7 of the mass and diameter of the sun, and so dim that even as seen from Alpha Centauri A and B, it would be only dimly visible to the naked eye. If Proxima is in orbit around stars A and B, it probably takes about 500 000 years to go around once.

The Morning Sky Stars
Achernar shines brightly in the SE before dawn, with the celestial river Eridanus flowing down to the SE horizon. The Crane, the Phoenix, the Toucan, the Bird of Paradise and the Peacock are all in neighbouring parts of the southern sky, while the Sea Serpent is also in the vicinity. The stars of the Pointers and the Cross are still visible low in the SW, with the stars of the Altar, the Level and the Wolf lying between the Pointers and the Scorpion. 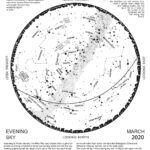