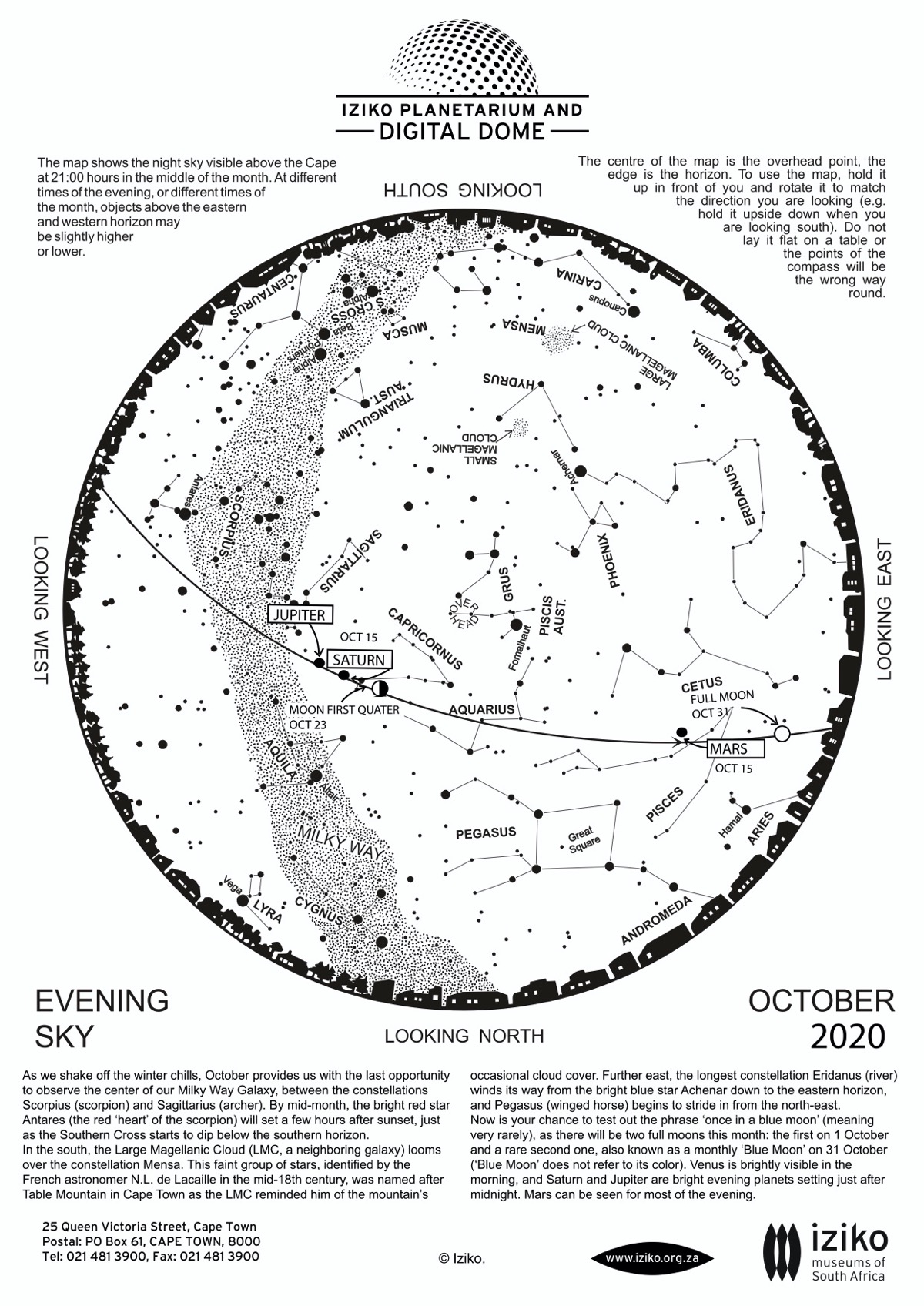 Posted at 23:48h in WhatsUp by Christian Hettlage

The Orionid meteor shower, active from the 2nd of October to November 7th, peaks on the morning of October 21st and is best observed from midnight onwards.

The Evening Sky Stars
The winter Milky Way is still visible in October evenings, running from the stars of the Swan (or Northern Cross) through the dim stars of the Fox and the Arrow to Altair and the Eagle in the northwest, forming a glowing backdrop for the stars of the Archer and the Scorpion’s tail in the west and WSW, and finally reaching the stars of the Centaur, the Cross and the Fly low in the south. Musca (the Fly) is an interesting constellation with a curious history. Originally it was known as the Bee, then the Bee-fly, and later the Southern or Indian Fly. When the Northern Fly was eliminated as a constellation in 1929, the southern sky cornered the celestial fly market completely. Theta Muscae is unremarkable to the eye, but one component of this ‘double star’ is a massive object which ejects material so vigorously that it has blasted out a ‘bubble’ more than three hundred light years across in the surrounding interstellar material. Part of the ‘Coalsack’, a remarkable dark cloud of dust blocking almost all light from stars behind it, spills over into Musca from the Southern Cross. This cloud is about 550 light years away, 60 light years across and weighs about 3500 times as much as our sun. It is easily the most obvious dark cloud in our night sky, and is typical of areas where new stars can form.

Between the Scorpion and the Centaur are the Altar, the Level and the Wolf, while to the east of the Milky Way stretches a great expanse of sky with relatively few bright stars, dominated by birds and ‘water constellations’. In the south these include the Peacock (just west of the Altar), the Crane, the Goldfish, the Toucan, the Water Snake and the Phoenix. Almost surrounded by the stars of the last three constellations (plus the Clock) are the bright star Achernar high in the SE, the bright star at the delta of the celestial river Eridanus. Near the zenith is the bright star Fomalhaut in the Southern Fish, with the stars of the Water Carrier and the Sea Goat just to the north, and the Crane just to the south. Rising in the east is Cetus the Whale, while the Great Square of Pegasus (the Flying Horse) dominates the north-eastern sky, flanked by the two Fishes (tied at their tails for some reason).

Not all constellations were always seen as we draw them today. The brightest star in the modern constellation of the Crane was described by the Arabs as ‘the bright one in the fish’s tail’, because they saw it as part of the tail of the Southern Fish. About 100 light years away and 380 times as bright as our sun, Al Nair is much hotter and younger than our sun. Almost all of the stars we see in our night sky are really brighter than our sun, even though the sun would appear the fourth brightest of the nearby stars if all were placed at the same distance. This is because most of the nearby stars are so much dimmer than the sun that they can only be seen through a telescope even though they’re close, while most of the stars we see with the naked eye in the night sky are so much brighter than the sun that they are easily visible at considerable distances.

The Morning Sky Stars
The early morning sky is dominated by the same bright stars that will shine in January evening skies after sunset. Almost overhead are the two brightest stars in the sky, Sirius and Canopus. Canopus would appear far brighter if they were at the same distance, but appears dimmer because it’s about 36 times as far away. Canopus is the brightest star in the giant ancient constellation of Argo Navis, the great ship of Jason and the Argonauts. Today this constellation, tangled in the Milky Way, has been subdivided into the Keel, the Rear Deck, the Sails and the Compass, with the Flying Fish zooming by the Keel and the Goldfish swimming ‘below’ (i.e. to the west). Dorado the Goldfish does not refer to the usual pet variety, but is named after a Hawaiian deep sea fish, usually called mahi-mahi, and is sometimes called the Swordfish. Rising in the southeast are the stars of the Cross and the Fly, with the Pointers and the Southern Triangle near the horizon. High in the southwest is the bright star Achernar, from which the Celestial River winds north and east toward Orion.

Orion the hunter is high in the north, with Taurus the Bull charging from the northwest. Low in the north is Auriga the Charioteer, which in most drawings of constellation figures shares a star with the Bull, probably making for a fairly wild chariot ride. Below and to the right of Orion (for an observer facing north) are the stars of the Twins. Of the two bright stars in the twins, Castor (below and to the left of Pollux) is a sextuple star, with three pairs of stars orbiting each other. The two brightest can be seen in a telescope, and the other four are ‘red dwarf’ stars far dimmer than our sun. Very high in the north is Lepus the Hare, just above Orion’s feet (Orion being ‘upside down’ for southern hemisphere sky-watchers). To the right of the Hare is the Big Dog, including bright Sirius, while the Small Dog (with the bright star Procyon) can be found directly to the west of Orion. Orion’s belt was seen by various peoples in southern Africa as three zebras, three lions, three dogs, or three pigs. The Xhosa took a less imaginative view, calling it amakroza meaning ‘three stars in a line’. 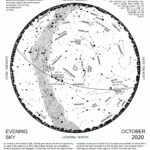