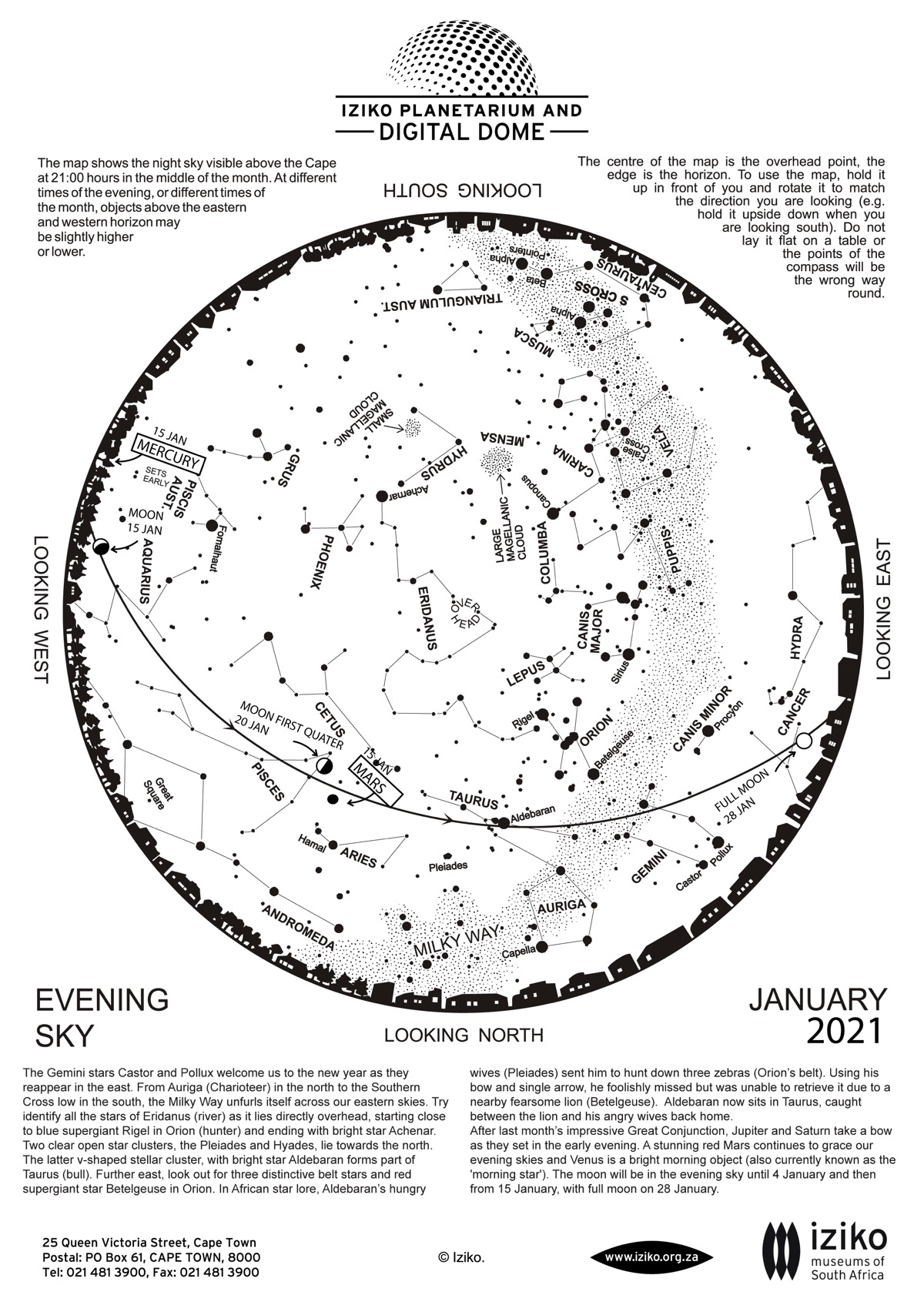 Posted at 17:52h in WhatsUp by Christian Hettlage

Venus is still dazzling the morning sky as the bright morning star. In the beginning of this month, the hottest planet in our solar system is located near the stars of the constellations Ophiuchus and later Sagittarius by month end. Venus will be near the crescent moon on the 11th of January.

This month presents an opportunity to observe the smallest planet in our solar system after sunset. In the beginning of the month, Mercury is too close to the Sun to be seen, but after the 7th of January it can be seen near stars of the constellation Capricornus, close to Jupiter and Saturn. Mercury, Jupiter and Saturn will be joined by the crescent moon, do not miss it.
Mars, the red planet, can still be seen in the evening sky, and it is located near the stars of the constellation Pisces. Jupiter and Saturn are located near the stars of Capricornus. At the beginning of the month Jupiter and Saturn are still close to each other, but as the month progresses, their apparent separation increases. Saturn reaches solar conjunction on the 24th of January. With the aid of a telescope, Uranus and Neptune can be seen in the evening sky.

The Evening Sky Stars
Low in the north in the evening are the stars variously known as the Seven Sisters, the Pleiades, or Isilimela. There are six stars in this cluster which are fairly easily visible to the naked eye, and hundreds that can be seen through a telescope. Located about 420 light years away, this is a group of stars which formed from a cloud of interstellar dust and gas about 120 million years ago. The Pleaides stars easily visible to the naked eye are all more than a 100 times brighter than our Sun – our own Sun only looks brighter because it is 27 million times closer to us! Above and to the right of the Pleiades is another cluster of stars called the Hyades, making up the muzzle of Taurus the Bull. The Hyades are about 150 light years away, and about 600 million years old. Bright orange Aldebaran looks as though it ought to be part of this loose group, but is only located in the same direction and, at only 64 light years away, is less than half as distant. It is, however, the most luminous star within a 100 light years of us.

Low on the northern horizon glitters Capella, brightest star in Auriga the Charioteer. As with other bright stars, the effects of atmospheric refraction can cause it to twinkle vigorously when near the horizon, appearing to flash in multiple colours. In July 1951, a pilot in northern Michigan chased Capella for half an hour under the impression that it was a UFO. Given that Capella is 42 light years away, it is not surprising he did not catch it.

High in the NNE are the brilliant stars of Orion, with the twins (Castor and Pollux), lower in the NE. Below Orion in the ENE (below Orion and to the right of the twins) is Procyon, brightest star in Orion’s smaller hunting dog. At only 11 light years away, Procyon is one of our nearest neighbours. Sirius is even nearer, high in the East in January evenings, at only 9 light years distant, and both have dim companions called “white dwarfs”, which are no larger than planets. The diameter of Procyon’s companion is only about 30% larger than the diameter of our Earth, while Procyon’s diameter is millions of kilometres! A white dwarf is a star that has used up its nuclear fuel, and is slowly cooling down until its crystallises, which typically takes billions of years. It still glows, but only with stored energy. Procyon’s companion, for example, is only 0.06% as bright as the Sun.

Canopus, the second brightest star in the Earth’s skies, is a bit SE of the zenith (the point overhead). South of the zenith is Achernar at the Southern end of the Celestial River, while Fomalhaut is the brightest star in the SW. In the southern half of the sky in January there is a curious blend of birds and water creatures (including the Southern Fish, the Crane, The Toucan, The Phoenix, The Peacock, the Bird of Paradise, the Flying Fish, the Swordfish and the Water Snake), mixed with mechanical and scientific constellations such as the Octant, the Pendulum Clock, the Chemical Furnace, the Microscope, the Engraving Tool and the Eyepiece Reticle. The Southern Cross and Pointers are very low in the SW even from the Cape and invisible from northern South Africa.

Still very high in the January predawn sky is Hydra the Water Monster, with the Cup mounted on its back and the Crow flying nearby. The brightest star in Hydra is Alphard, high in the NW in the January predawn sky. At a distance of 175 light years away, Alphard is a giant star 40 times the diameter of our Sun, and would stretch halfway to the orbit of Mercury if placed where the Sun is. Since Alphard is also 400 times brighter than the sun, we’d be crispy in a jiffy! 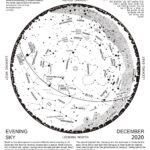