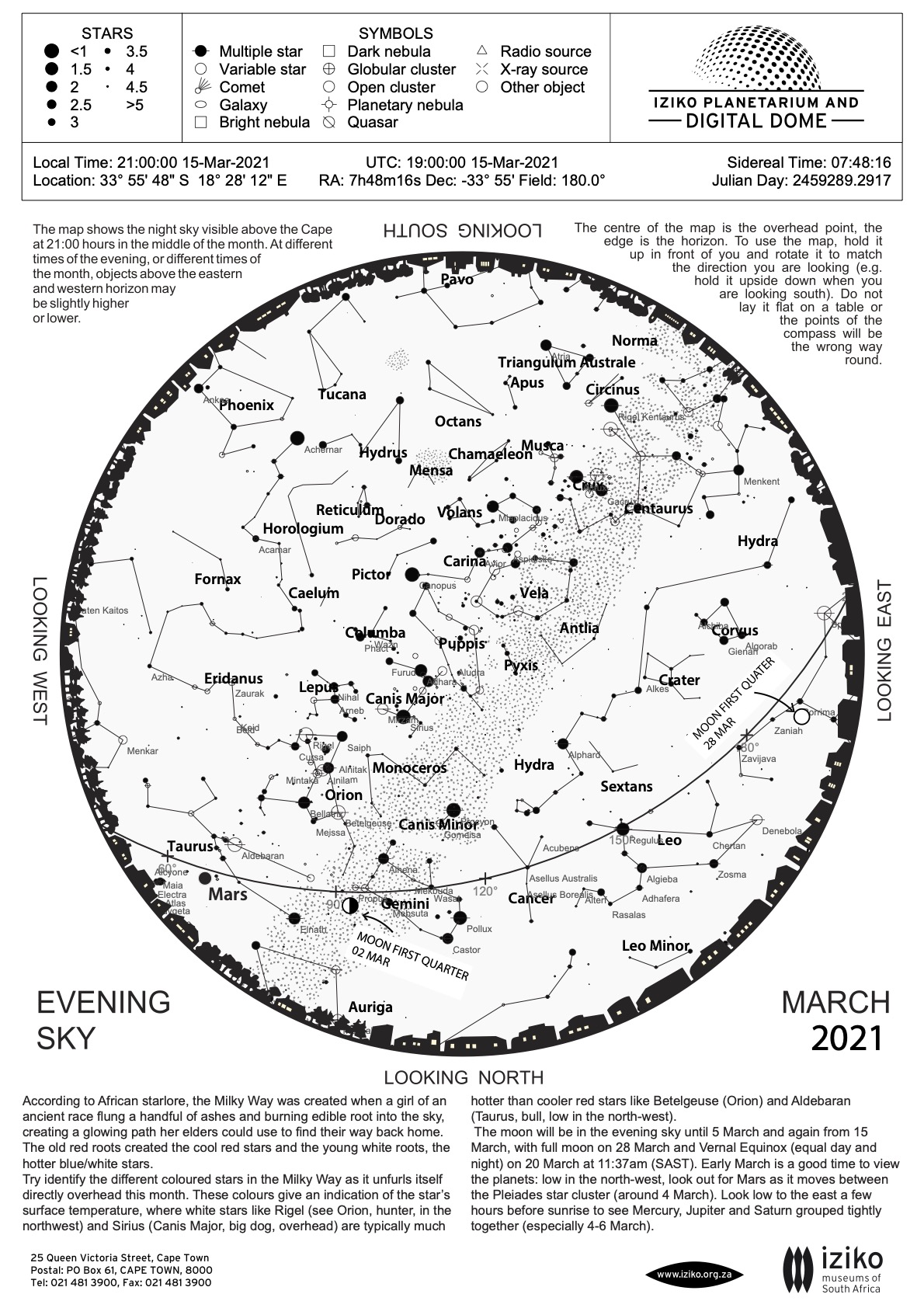 Posted at 15:54h in WhatsUp by Christian Hettlage

The March (Vernal) Equinox occurs on the 20th of March at 11h37 (local time), this marks one of the two dates in the year when day and night are approximately equal in length.

The red planet, Mars, is still the only bright planet visible in the night sky and is located near the stars of the constellation Taurus. Mars will be close to the Pleaides on the 4th and 5th of March. Mars will be near the Moon on the 19th of March.

Saturn, Mercury and Jupiter are still visible in the morning sky and can be seen in the eastern skies near the stars of the constellation Capricornus. The linear alignment of the three planets makes them very easy to locate for novice observers of the skies. The Moon will be near Saturn on the 9th and it will be near Mercury on the 12th of March.

The Evening Sky Stars
The bright stars near the summer Milky Way continue to dominate the evening sky, just as in February. The Milky Way runs from NNW to SE in early evening at the beginning of March, and from NW to SE at the end of the month. If you live where a lack of city lights allows you to see the Milky Way, notice how very different the northern and southern portions appear. In the north the Milky Way appears relatively smooth and dim, becoming suddenly brighter and clumpier south of straight up. In the north we’re looking out toward the edge of our Milky Way galaxy; while at the point where we see the sudden brightening (in the constellation of Carina, the Keel of the great ship Argo) we are looking along our spiral arm of the galaxy, where there are far more stars in the line of sight. Orion is still high in the NNW in early evening, outlined by the bright stars Rigel, Saif, Betelguese and Bellatrix. Taurus the Bull, with the brightish star Aldeberan, is low in the NW.

Directly below Orion in the north are the stars of Auriga the Charioteer, with brilliant Capella near the horizon. Capella is really a pair of giant stars which orbit each other every 104 days. About 100 million km apart, the two stars are each about 10 times the diameter of the Sun, and 50 and 80 times as bright, respectively.

Low in the NNE are the bright stars of the Twins, Castor and Pollux. Castor is another interesting multiple star. Through a telescope, there are 3 stars visible, and astronomers have discovered that each of these is itself double. Castor thus consists of 3 pairs of stars, with each pair of stars orbiting each other with periods of 20 hours to 9 days, the two bright pairs orbiting each other every 400 years, and the dim pair orbiting the other two over many thousands of years.

The brightest star in the sky (not counting the Sun), Sirius the Dog Star, appears almost overhead on March evenings, while a bit south of the point overhead is the second brightest star in the sky, Canopus. Rising in the southeast are the stars of the Southern Cross and the Pointers (Alpha and Beta Centauri). Alpha Centauri is a triple system, with two sun-like stars orbiting each other every 80 years and a dim red dwarf tagging along at a much larger distance. This rather insignificant red dwarf was discovered by Robert Innes at the Union Observatory in Johannesburg in 1915, who also suggested the name Proxima. As seen from a planet around either of its brighter companions, Proxima would be an ordinary dimmish star, invisible for observers plagued by city lights. When it was discovered, Proxima was the faintest star known, but it has long lost this distinction. At a little over 4 light years away, the stars of the Alpha Centauri system are the closest neighbours of our own Sun.

Achernar and the Magellanic Clouds (looking like detached pieces of the Milky Way) can still be seen in the southwest on March evenings. The Large and Small Clouds are the nearest galaxies to our own Milky Way (with the exception of two small galaxies actually being swallowed by our galaxy) and are about 180 thousand and 190 thousand light years away, respectively. Compare this with Achernar, which is located inside the Milky Way and is only a mere 90 light years away. The Sotho referred to Achernar as the senakane (the little horn) while the shield of the little horn is the Small Magellanic Cloud, known as mo’hora le tlala (plenty and famine). If dry dusty air made it appear dim, famine was to be expected.

The Morning Sky Stars
Bright orange Arcturus is low in the northwest before dawn, while ice-white Vega can be seen rising in the northeast. Vega is one of our neighbours, only 25 light years away, and is surrounded by a disk of dust which has intrigued astronomers. To the right of Arcturus is the dim semicircle of the Northern Crown, with the stars of Hercules between the Crown and Vega. Almost overhead is Antares, heart of the Scorpion. The Milky Way runs from northeast to southwest, with the brightest part of the Milky Way in the Scorpion and in Sagittarius the Archer.
High in the south are the stars of the Southern Cross and the Pointers, with bright Canopus very low in the southwest. Achernar shines low in the southeast, with the stars of the ‘Celestial Aviary’ above it. In this part of the sky are the Toucan, the Phoenix, the Crane and the Peacock, assorted scientific instruments and the Southern Fish. 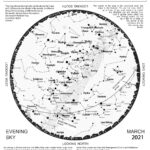