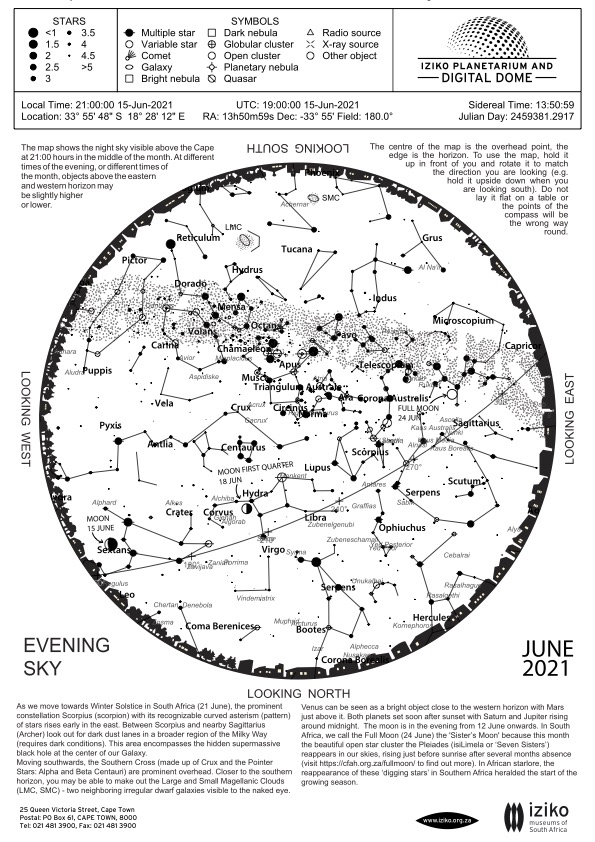 Posted at 21:58h in WhatsUp by Christian Hettlage

There will be an annular solar eclipse on the 10th of June, however it will not be visible in Africa. It will be observable in Greenland, Northern Canada and Russia.

The Winter Solstice will occur on the 21st of June at 05h32.

The Evening Sky Stars
Leo the Lion’s upside down question mark should be easy to spot in the NW early in the evening, with the right triangle of the Lion’s hindquarters and tail following in the NNW. Bright orange Arcturus guards the Great Bear (invisible from the Cape except for its feet) from the NE, with the dimmer semicircle of the Northern Crown a bit to the right for an observer looking N. Snaking its way across the sky above the constellations of the Lion, the Virgin and the Crow is the great water monster Hydra, with lonely Alphard at its heart fairly high in the NW at evening’s beginning. Alphard is an orange giant star, 175 light years away and 400 times as bright as our Sun. If Alphard were at the centre of our solar system, it would extend halfway to the orbit of Mercury, and we would be toast. Arcturus is a similar star, also an orange giant, which appears brighter in our skies because it’s only 37 light years away – but it is really only half as bright as Alphard. It’s always a good idea to remember that the universe is NOT two-dimensional, but that stars are at varying distances from us!

By month’s end the Milky Way follows a path from west to ESE across the southern sky, with the bright stars Sirius and Canopus nearby in the W and SW, and the Large Dog, the great ship Argo, the Cross, the Fly, the Centaur, the Wolf, and the Scorpion tangled in the Milky Way itself. By late June the centre of our Milky Way has begun to rise even in early evening, and by late evening in winter the Milky Way is at its most majestic, with the centre of the galaxy passing nearly overhead. Notice the way the brighter stars are mostly in a belt almost, but not quite, coinciding with the Milky Way. This is ‘Gould’s Belt’, showing where young stars in our part of the galaxy have been forming in the last few million years. From outside, our Milky Way galaxy would look like a glowing pancake with a lump in the middle, but the pancake would not be perfectly flat – some parts would appear slightly tilted or warped. Below the Milky Way are the bright stars Canopus in the SW and Achernar (very low in the SSW), the ‘horn’ and ‘little horn’ stars of African legend.

The Morning Sky Stars
By morning, the Milky Way has nearly set, running near the horizon from north around through the west into the south. Deneb shines in the NW predawn skies of early June, marking the top of the Northern Cross, with bright Vega near the northwestern horizon. In the WNW, Altair is the brightest of the stars of Aquila the Eagle, flying southward through the Milky Way. Low in the WSW and SW are the stars of the Archer and the Scorpion, with the stars of the Pointers and the Cross low in the SSW and S as seen from the Cape. From northern South Africa they will typically be invisible.

Almost overhead in the predawn sky at the beginning of the month is the Southern Fish with its brightish star Fomalhaut (‘mouth of the fish’), the 18th brightest star in the night sky. It’s only 25 light years away and about 16 times brighter than our sun. Around it is a celestial doughnut, a giant disk of icy dust four times the diameter of our solar system. But the centre, around the star itself, is largely free of this material, possibly because planet formation has swept this area clean.
To the south of Fomalhaut are the stars of the Crane, with bright Achernar a bit further southeast. Canopus rises low in the SE before the Sun in early June, and by late June, bright Sirius is visible low in the ESE as well, while Orion can be seen low in the east before sunrise.

High in the northern sky are the stars of the Great Square of Pegasus. The Fishes are above and to the right of the Square (tied together by their tails). Beyond the Fishes, high in the NNE sky, is the Whale. With the Water Bearer and the Sea Goat to the SW of Pegasus, and the Southern Fish nearly overhead, this is a fairly waterlogged part of the sky! 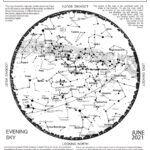