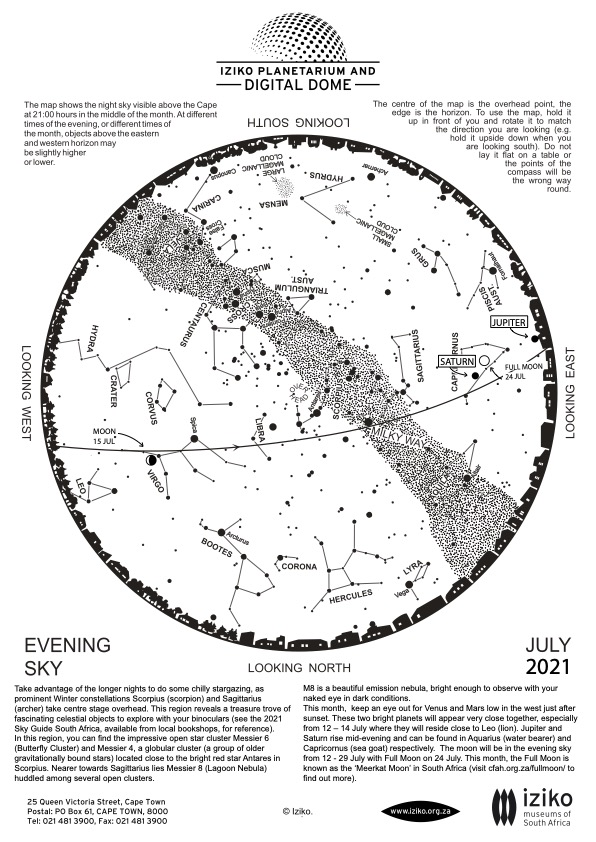 Posted at 22:15h in WhatsUp by Christian Hettlage

The dwarf planet Pluto reaches opposition on the 18th of July and is therefore well positioned for observation, although you need a large telescope to see it. It can be located near the stars of the constellation Sagittarius.

The Piscis Australids are active from the 19th of July to the 17th of August, peaking on the 28th July. They are best viewed between 21:30 PM (east) and 05:00 AM (west) looking towards the constellation of Piscis Austrinus (the Southern Fish, not to be confused with Pisces).

The Evening Sky Stars
The Milky Way is a dominant presence on July evenings, with the brilliant stars of Centaurus nearly overhead and the Cross just to the south. Marking the southern edge of the Milky Way below the Centaur are the dimmer stars of the Housefly and the Southern Triangle. To the west of Centaurus along the Milky Way is the great ship Argo, with Canopus, second brightest star in the night sky, glowing low in the SW. Sirius appears brighter in our sky only because it’s so much closer (9 light years as compared to Canopus’ distance of 313 light years). Canopus is a supergiant star, 8-9 times as massive as our own Sun, 65 times the Sun’s diameter and 15,000 times as bright. Although the surface temperature of Canopus is ‘only’ 7800 degrees, its atmosphere is heated to about 20 million degrees, meaning plenty of hard radiation for any alien astronaut unfortunate enough to be nearby.

To the east of the Centaur are the stars of the Wolf and the Scorpion, with the Altar just to the south at the edge of the Milky Way. But the thickest part of the Milky Way lies around Sagittarius, the Archer, and the stars of the Scorpion’s sting. In this direction is the centre of our galaxy, and hidden by thick dust clouds is the black hole in the exact centre, 4 million times the mass of our Sun and a bit smaller than the size of Earth’s orbit.

Just north of the Centaur is the tail of Hydra, the giant water snake, with its body extending far into the west almost parallel to the Milky Way. Low in the west is Alphard (Arabic for ‘the solitary one’). Low in the NW are the stars of the Lion, while low in the northeast are the dim stars of the great hero Hercules with the delicate semi-circle of the Northern Crown between it and a bright orange Arcturus (the ‘Bear Guard’) low in the north.

Arcturus is the brightest star in Boötes (the Herdsman), which some say is the most ancient constellation in the sky. It looks brighter than any other star in the northern hemisphere, and is an orange giant 37 light years away, 215 times as bright as our sun, and 26 times the Sun’s diameter. Arcturus’ orbit around the centre of the galaxy is quite different from the orbits followed by most stars in our neighbourhood, and it has only 20% as much iron. One possible explanation is that it may originally have been part of a small galaxy that merged with our Milky Way billions of years ago.

The Morning Sky Stars
The Milky Way runs completely around the horizon on July mornings, appearing low in the sky in every direction. That means that when you look overhead you are looking straight from our Milky Way galaxy toward the South Galactic Pole.

Orion the Hunter, with orange Betelgeuse and blue-white Rigel, is rising in the east. From the northeast, the V-shape of the Bull’s head (with bright Aldebaran as the Bull’s glowing eye) charges Orion. And riding on the back of the Bull is the open cluster of stars called the Pleiades, which is about 400 light-years away. The Pleiades are also widely known as the Seven Sisters, and known to the Namaqua as “the daughters of the sky god”.

On the low in the ESE we see brilliant Sirius, brightest star in the night sky, among the other stars of Orion’s Large Dog, while the Hare scampers between the Dog and the Hunter. The second brightest star in the night sky is Canopus, seen in the southeast on July mornings, and marking the Keel of the upside-down Ship Argo. (As most of the constellations were invented in the northern hemisphere, we tend to see them bottom side up.) High in the south is bright Achernar, marking one end of the celestial river Eridanus. The other end is near Rigel about where Orion’s knee would be. Below Achernar in the south are the southern Water Snake and the Toucan, with the Peacock a bit lower in the SW. Alpha Pavonis is actually a pair of hot, luminous blue-white stars about 183 light years away, revolving around each other every 11.75 days. It’s about 450 times as luminous as the Sun.

High in the W are the Crane and the Southern Fish, with its bright star Fomalhaut, with the stars of the Sea Goat making a dim irregular triangle a bit lower in the W. High in the N and NE is the appropriately large constellation of the Whale, reminding us that in a couple of months it will be time for whale-watching again along the Cape coast. 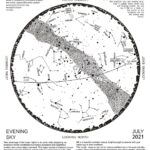