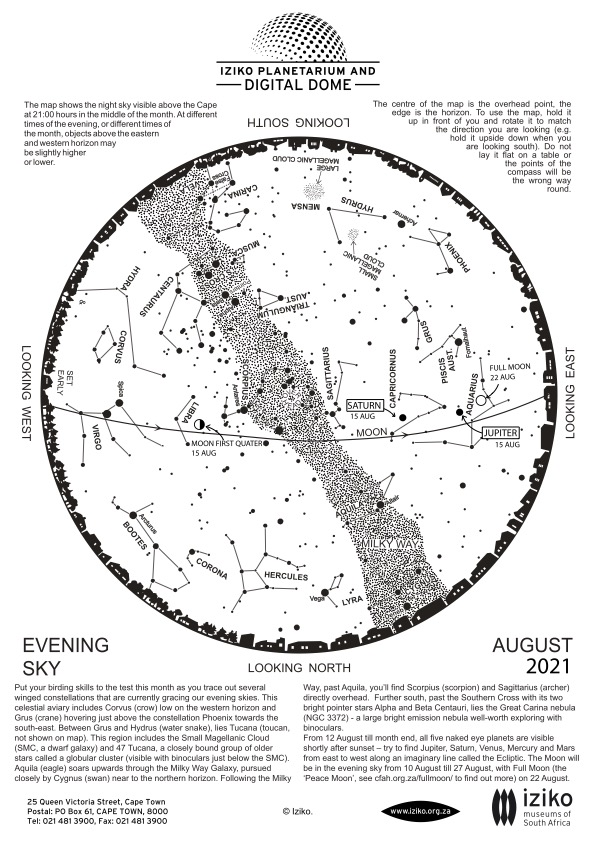 Posted at 21:28h in WhatsUp by Christian Hettlage

The Evening Sky Stars
In the north, orange Arcturus shines brightly in the evening sky, with the half circle of the Northern Crown to the right, and bright white Vega rising low in the north east. Higher in the ENE, tangled in the northern Milky Way, is Aquila the Eagle with its bright star Altair. Vega and Altair are relatively nearby stars, but like most of the stars visible to the naked eye would appear much brighter than the Sun if they and the Sun were at the same distance.

To the south of Arcturus, high in the NW, shines blue-white Spica, the brightest star in Virgo. Spica actually consists of two stars 260 light years away from us, orbiting each other once every 4 days. Both are much hotter and brighter than the Sun. The brighter of the pair is 11 times as massive as our Sun and 13 000 times as bright, the other 7 times as massive as our sun and ‘only’ 1 700 times as bright.
Red Antares and the stars of the Scorpion are almost overhead in the early evening, and you should easily be able to see the shape of the Scorpion – this is one of the few constellations which really resembles the creature it’s named after. Antares is about 600 light years away, and radiates about 10 000 times as much energy as the Sun at wavelengths perceived by the eye. But Antares has a surface temperature of only 3 300 degrees (compared to 5 500 for the Sun), and radiates most of its energy as infrared radiation. The total energy output of Antares is about 65 000 times as much as the Sun, and this ‘red supergiant’ is so large that if it were placed at the centre of our own solar system, the orbit of Mars would be less than halfway from the centre of Antares to its swollen surface.

High in the south are the Giraffes of Vha Venda star lore (the Pointers – Alpha and Beta Centauri – and the stars of the Southern Cross). For observers away from city lights, the winter Milky Way is spectacular on August evenings when the moon doesn’t interfere. The centre of our Galaxy is nearly overhead, and it is easy to see the ‘pancake’ shape of our wheel of hundreds of billions of suns, complete with the bulge near the middle. For the Indian tribes of South America, the dark patches in the Milky Way were also constellations. We know today that such dark areas as the Coal sack (near the Southern Cross) and the Great Rift are dense dust clouds where new stars are forming.

The Morning Sky Stars
Orion is once again prominent in the eastern sky, raising his club to swat the pesky Bull that forever charges at him. Orion’s two dogs are with him as well, with Procyon (brightest star in the Small Dog) lower in the east and Sirius (brightest star in the Large Dog) to the southeast of Orion. It’s unclear, however, whether the dogs are paying attention to Orion’s problems or to the hare which is hopping by between Orion and the Large Dog.

High in the southeast shines Canopus (called uCanzibe in isiXhosa), second brightest star in the sky and brightest star in the huge ancient constellation of Argo, the great exploring ship that sought the Golden Fleece. Today it’s split up into several smaller constellations such as the Sails and the Keel. If the Argo is headed to or from Cape Town, it’s only logical that Table Mountain is in view, and it is just possible (on a dark night far from city lights) to see the dim stars of the Table Mountain (Mons Mensae) constellation in the far south. Thanks to Nicolas-Louis de Lacaille, who added more than a dozen constellations to the southern sky as he observed from Cape Town, Table Mountain is the only geographical feature on Earth to have its own place in the stars. You’ll probably find it easier to see the Tablecloth, represented by the Large Magellanic Cloud. The LMC, as astronomers know it, is a satellite galaxy of our own Milky Way, and a mere 180 000 light years away. It’s the closest galaxy to our own which is not actually being ‘digested’. Our Milky Way is cannibalizing two small galaxies at the moment, and neither is fully separate anymore. Part of the LMC (which looks to the eye like a stray patch of the Milky Way) slops over into the nearby constellation of the Swordfish, and the remainder of the southern sky is taken up with an odd collection of birds, water creatures and scientific instruments such as the Peacock, the Crane, the Water Snake, and the Rhomboidal Net. The instruments, like Table Mountain, owe their place in the sky to Lacaille’s mapping of the southern sky in the mid-eighteenth century.

Flowing from the southwest corner of Orion is the long winding constellation of Eridanus the celestial river, with bright Achernar near its ‘mouth’ high in the southwest. Canopus is ‘Naka’ (the ‘Horn’ star), in the Sotho calendar, while Achernar is ‘Senakane’, the ‘little horn’. To the west of Eridanus is a rather watery part of the sky including the Whale, the Fishes, the Water Bearer and the Sea Goat. Fomalhaut (meaning ‘mouth of the southern fish’) is the brightest star in the western sky, but almost all the bright stars in this month’s morning sky are in the east. It’s relatively nearby (only 25 light years away) and a mere 200 million years old, making it just a baby compared to the Sun. A huge disk of icy dust, four times the diameter of our solar system, surrounds Fomalhaut. There is a clear area around the star itself which may have been caused by the formation of a system of planets, but the actual planets elude detection so far. It’s quite likely that there are planets. 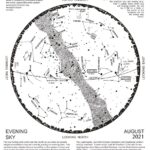