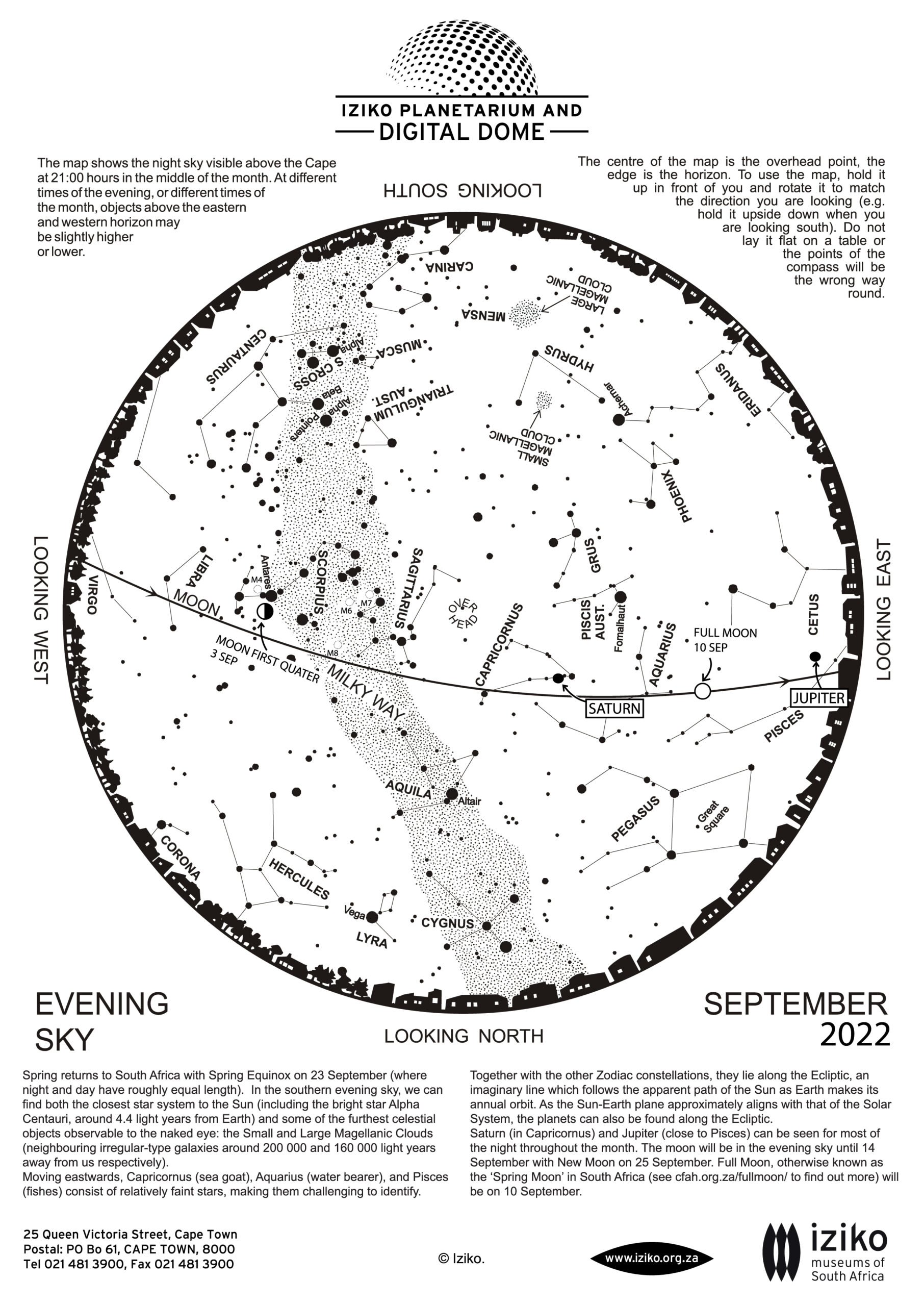 Posted at 15:43h in WhatsUp by Christian Hettlage

The (southern hemisphere) spring equinox is predicted to occur on the 23rd of September at 03h03. At this time, the Sun will be located directly above the earth’s equator, as it appears to move southwards. This is the second instance of this occurring during the year, the other instance being of course the autumn equinox, which occurs about 6 months earlier when the Sun is on its northbound journey. The spring equinox marks the promise of warmer days ahead for those in the southern hemisphere, while for those in the northern hemisphere colder days lie in wait. These seasonal changes are the result of the tilt of Earth’s rotation axis relative to is orbit around the Sun.

The Evening Sky Stars
The winter Milky Way still sweeps majestically across the sky from NNE to SSW in early September evenings, and the centre of our Milky Way galaxy is almost overhead. Just to the west of the zenith is the Scorpion, with the reddish star Antares at its heart. Antares (or ‘rival of Mars’) is a huge star 600 light years away, shining in visible light with 12000 times the power output of our own sun. But Antares is also so much cooler than the sun (hence the red colour) that most of its energy output is in the infrared, and its total power output is 40000 times that of the sun. If Antares were suddenly placed at the centre of our solar system, Mercury, Venus, the Earth, Mars and the asteroid belt would be inside this monster star, whose vaguely defined surface would lie 4/5 of the way from the star’s centre to the orbit of Jupiter. Gravity at the surface of Antares is so weak that it is losing mass fast enough to create a visible nebula or gas cloud around it, lit by Antares’ hot companion star. In the next few million years or so, Antares may explode as a supernova — so keep your eyes on the Scorpion if you’re the patient sort. Just NE of Scorpio in the Milky Way are the stars of Sagittarius the Archer, making a pattern a bit like a teapot. It’s in this constellation that the centre of our galaxy is located, but you can’t actually see the centre directly because of the thick dust clouds in between. Only one in a billion photons of visible light from the Galactic Centre can get through, and infrared cameras are needed to show what’s there. Infrared observations of stars orbiting the centre suggest that right at the centre is a black hole about 3 million times as massive as our sun. The Event Horizon Telescope, a global network of radio telescopes, managed to take an image of this black hole.

High in the NE, toward the edge of the Milky Way, is the bright star Altair in Aquila the Eagle. Altair is easy to recognize because of the dimmer stars more or less equally spaced on each side. Another bird constellation, low in the NE and thoroughly tangled in the Milky Way, is Cygnus the Swan, also known as the Northern Cross. At the NE end (top) of the Cross is Deneb, the tail of the Swan. Deneb is much more distant than most of the stars we see with the unaided eye, and its true brightness has been estimated at 160 000 suns. To the right (W) of Deneb is another bright northern star, Vega, only about 1/100 as far away at 25 light years. Vega is really much dimmer than Deneb, but appears brighter because it is so much closer. If Deneb were as close as Vega, it would be by far the brightest star in the sky, as bright as a thickish crescent moon!

Low in the NW in early evening is the bright star Arcturus, with Spica glowing low in the west amidst the ‘dance of the three planets’ described above. Higher in the west (and just north of the Scorpion) is the curious constellation of Ophiuchus the Serpent Holder. One half of the Serpent stretches from the hands of Ophiuchus toward Arcturus and the Northern Crown in the NW, while the other extends along the Milky Way toward the Eagle. South of the Scorpion are the Altar, the Level and the Wolf, while further south we find the Centaur (including the Pointers) and the Southern Cross. Fomalhaut is now high in the east, with bright Achernar, ninth brightest star in the night sky, low in the southeast.

The Morning Sky Stars
By the time the Earth’s rotation allows us to see the predawn September sky, Achernar (the ‘mouth’ of the celestial river Eridanus) is much higher in the south, with Fomalhaut (in the Southern Fish) low in the SW. Achernar is spinning so fast that its equatorial diameter is about 11.8 times that of the sun, while its polar diameter is only 7.6 times solar. Partly due to its very fast spin, Achernar is losing mass thousands of times as fast as our own sun, and is thousands of times as bright. High in the southeastern sky is Canopus, second brightest star in our night skies and the brightest star in the ancient constellation of Argo, the great ship. High in the east is Sirius, brightest star in the night sky as seen from Earth. If Canopus were at the same distance as Sirius, however, it would shine about 400 times brighter. Sirius is the brightest star in Orion’s Large Dog, and the stars of Orion, including bright Rigel and Betelgeuse, are high in the NE before dawn this month. Charging Orion is Taurus the Bull, with Aldebaran serving as an inflamed orange eye. No wonder Orion has his hide shield raised in front of him. Behind Orion, his Small Dog (with the bright star Procyon) is prudently staying on the safer side of the contest, while totally indifferent to all this drama, Auriga the Charioteer (with the bright star Capella) drives by low in the north. 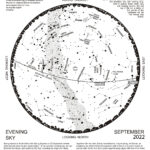