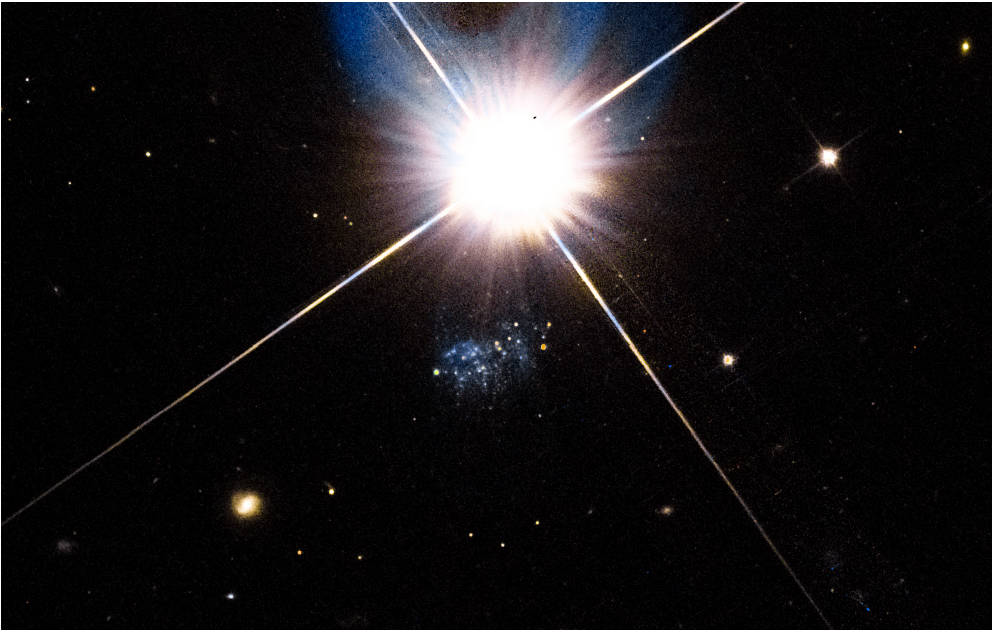 Posted at 11:19h in News, Press Releases by Moloko Makwetja

The discovery is detailed in a paper published recently in the Monthly Notices of the Royal Astronomical Society by collaborators, including the South African Astronomical Observatory’s (SAAO) Alexei Kniazev.

The team called this dwarf the ‘Peekaboo’ galaxy because of the way it has been hiding in the halo of a bright foreground star of magnitude 10.4, and because of its potential importance. 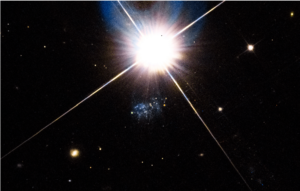 In the standard picture that astronomers have of galaxy formation, stars started forming in the first billion years after the Big Bang, when the universe was dense with cooled hydrogen and helium gas. Lots of these groups of stars came together to form big galaxies, while others formed small dwarf galaxies.

Over the more than 13 billion years since the Big Bang, the life cycle of births and deaths of stars has transformed some of that primordial gas into the heavier chemical elements we find today. The process is most efficient in big galaxies and less so in dwarf ones. In any event, a key point is that almost all galaxies studied by astronomers have old stars as an important constituent.

Almost all, but perhaps not all. There is a very small group of dwarf galaxies with common and perplexing properties. For one thing, 10 times more of their normal matter (discounting mysterious dark matter) is in the form of hydrogen and helium gas rather than stars. Also, the fraction of heavier elements is the smallest ever seen in galaxies. But most intriguing, essentially all the stars that can be resolved in HST images are less than a billion years old. Where are the 13-billion-year-old stars we think we see in almost all other galaxies?

The Peekaboo galaxy is the closest example of these unusual systems, which makes it especially interesting because it can be studied in greater detail.

It was discovered through a search for sources of hydrogen gas using the Parkes Radio Telescope in Australia. The Doppler shift of the hydrogen spectral line revealed what had to be a nearby galaxy. Peekaboo became apparent using HST imaging, showing it to be 15 arc seconds away from a bright star.  Astronomers used SALT and found extremely poor amounts of chemical elements in this galaxy.

Alexei Kniazev said,” A hundred years ago, this fast-moving foreground star would have appeared directly in the line of sight, and the Peekaboo galaxy would not have been detectable at all.”

The existing images of Peekaboo galaxy are seriously compromised by the glare of the bright star. Much deeper images will be possible with proper masking. Future observations with the HST and James Webb Space Telescope (JWST) should determine if stars began forming in Peekaboo early in the life of the universe, as expected according to galaxy formation theory, or whether Peekaboo is inconsistent with this theory and can be called ‘young’.

“We are going to continue our studies of this galaxy with SALT, as well as extend our spectral analysis to understand Peekaboo’s evolution in more detail,” said Alexei Kniazev.