The 1.0-m telescope was built by Grubb Parsons in 1964 and erected originally in Cape Town. At the time of the move to Sutherland, the Cassegrain f-ratio was changed from f/20 to f/16. See the optical diagram in Figure 1 for the relevant dimensions.

Sky Coverage
The design of the telescope and its building limit the view of the sky somewhat. The following are approximate observing limits for the 1.0-m telescope on the east side of the pier.  The eastern limits are set by the south pier at -80° and the prime focus carriage at all other declinations.

Acquisition & Autoguider Camera
Use of the acquisition camera and autoguider is described in the TCS manual, which also contains instructions for the selection of guide stars.  Findercharts of 8×8 arcmin are appropriate.

Visitors’ Instrumentation
There are practical limitations on the equipment that can be mounted on the telescope. The unvignetted field is about 34.5 arcmin (160 mm), but if the acquisition and guidance box is used this reduces it to 12 arcmin (55 mm). The focus can only be moved from 250 mm behind the mounting plate to 950 mm behind it, or if the guider box is used, from 0 mm to 530 mm. The instrument may weigh up to 150 kg. It may be possible to carry heavier equipment but SAAO should be consulted at an early stage. The equipment should not be longer than 1500 mm. Note that long, bulky equipment severely restricts the observing limits of the telescope. Cables for visitors’ own equipment should be about 12 m long to drape over the telescope and reach the floor. The warm room is about 5 m away when the telescope is on the east side of the pier. 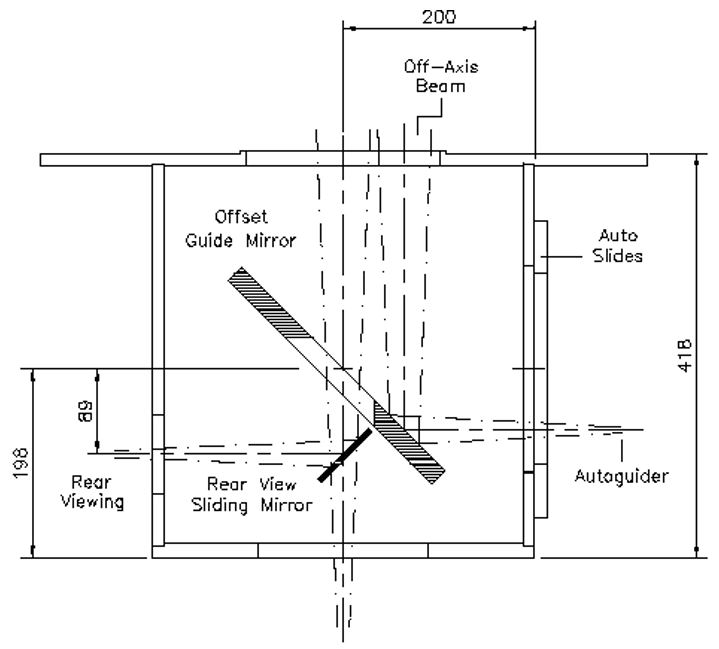