This telescope was built by Grubb Parsons in 1938-48 for the Radcliffe Observatory, Pretoria. It has a 2-pier asymmetrical mounting. All observing is done with the telescope East of the polar axis; the telescope can no longer be used West of the pier.

Figure 1 shows the extent of the unvignetted visible sky when the telescope is east of the polar axis.  Additional limitations apply in the case of certain instruments. 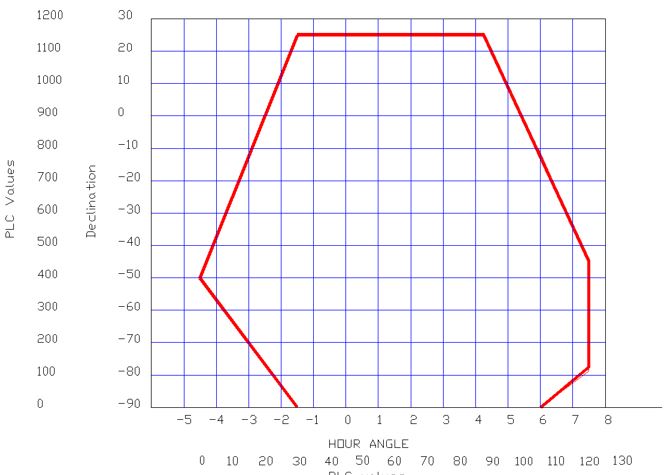 Optical diagrams with relevant dimensions for the various foci are given in Figure 2.  Observing with SAAO instruments is performed from the warm room.  However, the Newtonian focus may be reached from a carriage which can be moved around the dome. Reaching the Cassegrain focus may require the observer to be as much as 4 m above the floor. Access is provided from a motorised x-y-z carriage whose platform is 1.42 x 1.98 m. There are also various ladders available. 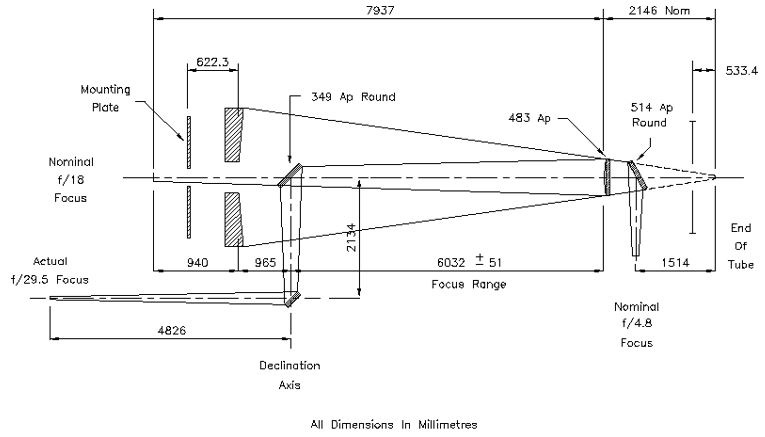 The acquisition box for instruments other than the grating spectrograph contains two 45° mirrors, one for offset guiding and one for rear viewing (Figure 3). These can be slid sideways pneumatically. The offset guiding mirror has an elliptical central hole with a 64 mm minor axis (giving a circular working aperture equivalent to 6.5 arcmin). The field of view for rear viewing is 4 arcmin. For autoguiding the same CCD detector is used as for acquisition, so the field of view will be the same as the acquisition TV field for the instrument in use. Stars for offset guiding should be bright enough to appear in the Hubble Guide Star Catalog, and must be located between 3′ and 7′ from the optical center. Difficulty in autoguiding may be experienced with stars brighter than 9th magnitude. A facility to mount a TV camera at the rear view focus is provided. There are bolt circles for attaching instruments to this acquisition box, as can be seen in Figure 4.

A similar acquisition/guider box (without rear viewing) is built into the spectrograph. The annulus for autoguiding is the same as given above. 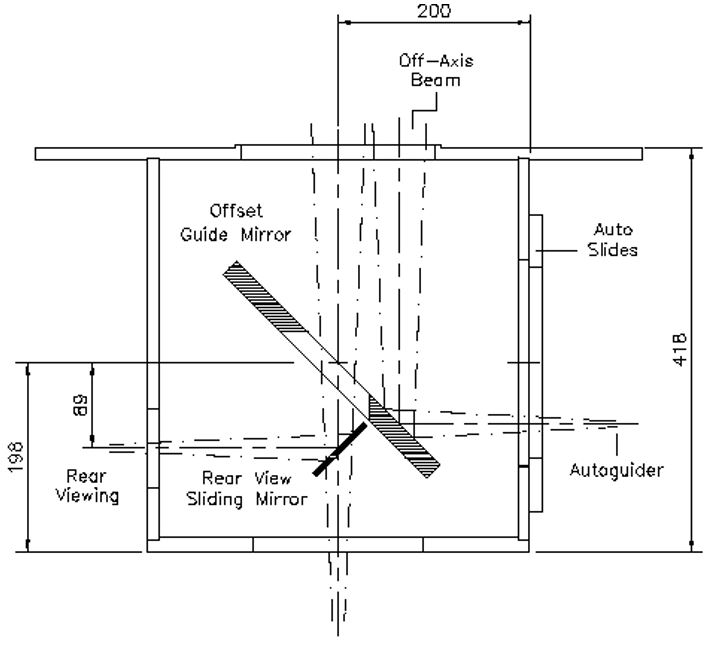 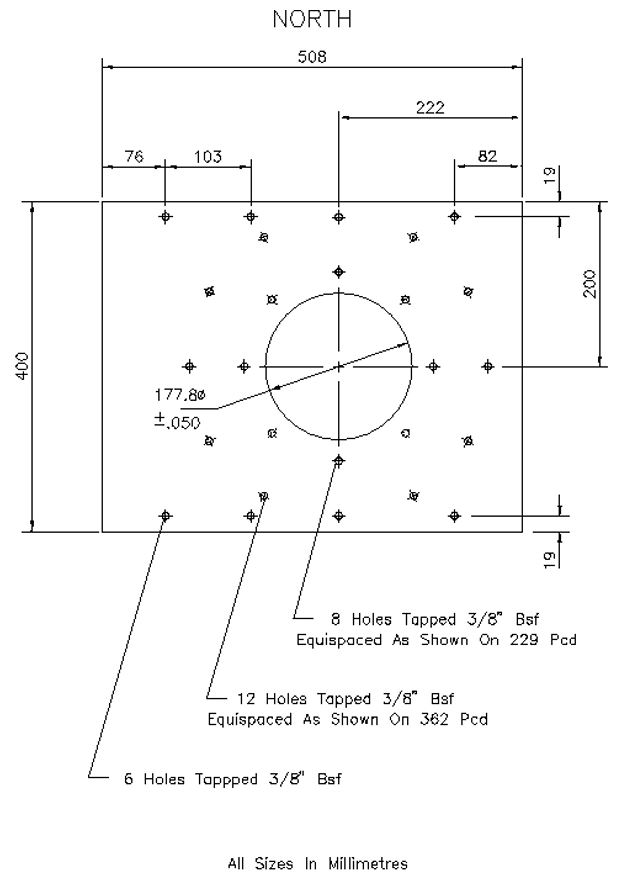 The acquisition cameras/auto-guiders for the 1.9-m and 1.0-m telescopes at SAAO use 385 x 288 dye-coated EEV CCDs and are operated via transputer-based controllers. They have a broad wavelength response from roughly 0.35 to 1.0 µm with a peak around 0.7 µm.

Focal reducers for f/18 enable the acquisition camera to be used with the spectrograph on the 1.9-m telescope.  The image scale is approximately 0.5 arcsec/pixel on both telescopes.  Findercharts of 8×8 arcmin are appropriate.

There are separate drives for quick and slow motions on each axis. The R.A. fast drive is continuously variable; the declination fast motion utilises a two-speed motor.

The following slow-motion speeds are available:

Observers wishing to use “trail” will need to arrange for the use of one of the “old” handsets.

Special equipment is often difficult to mount and enquiries should be made well in advance. A special Cassegrain instrument mounting flange has been manufactured to accommodate instruments of up to 250 kg or less, with a versatile system of counterweights. Bolt circles are as shown in Figure 5.  Figure 6 shows the filter box mount plate. 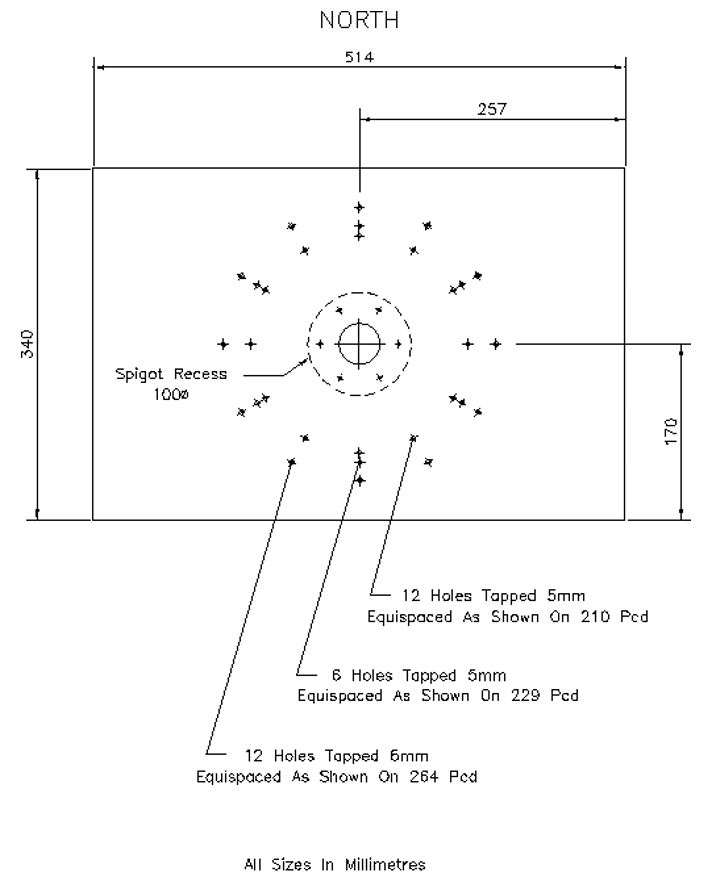