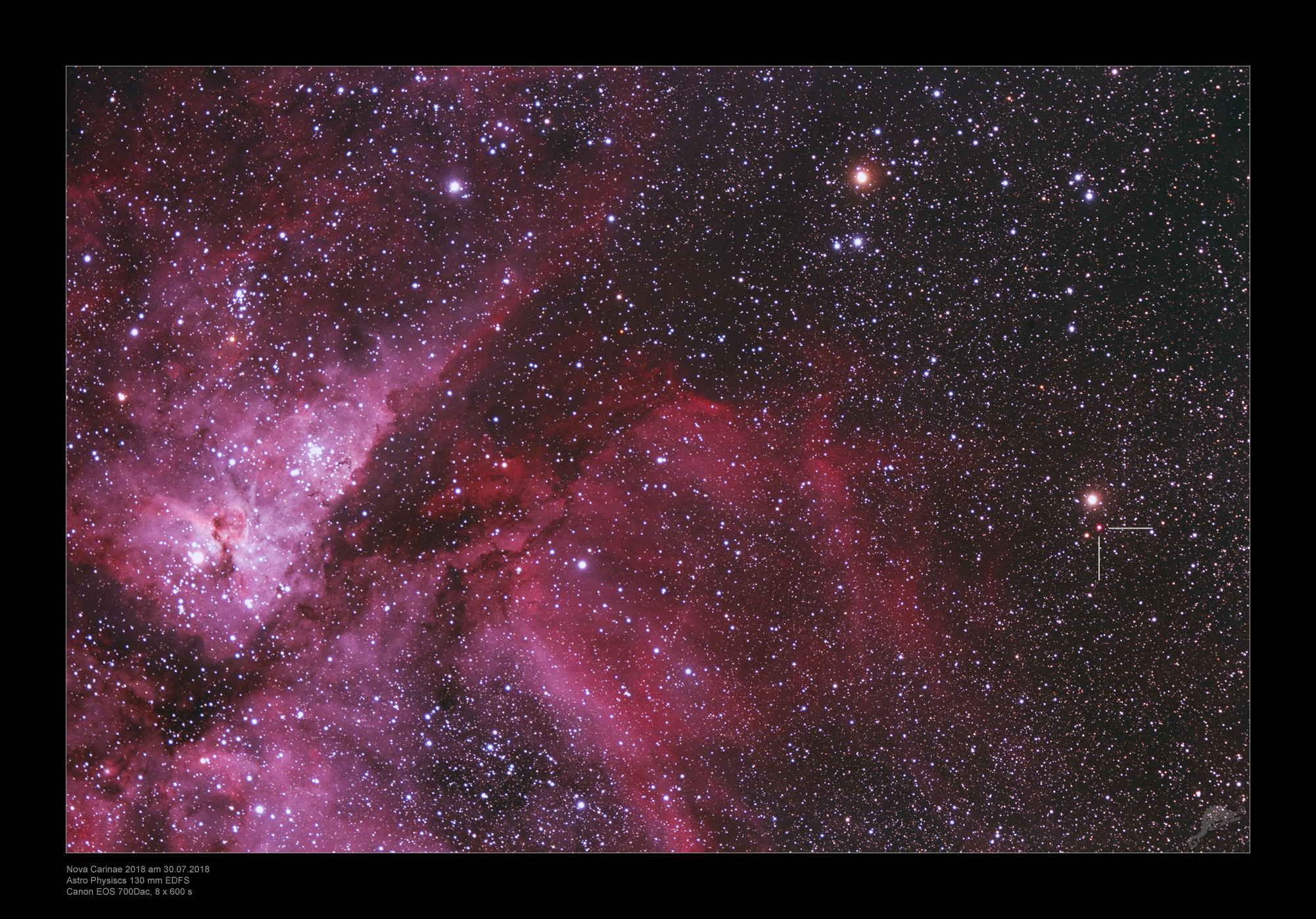 14 Apr SALT contributes to a new understanding of novae

Posted at 09:37h in Press Releases by Daniel

An international team of researchers, led by Dr Elias Aydi, a former SAAO and University of Cape Town PhD Student, now at Michigan State University (MSU), have discovered a new cause for the incredible brightness observed when a star explodes. The discovery used high-resolution optical spectroscopy from different telescopes including SALT to better understand the stellar explosion or nova.

A nova is an explosion on the surface of a star that can produce enough energy to increase the star’s brightness by millions of times. Sometimes a nova, which occurs in stars called white dwarfs, is so bright it appears as a new star to the naked eye. A white dwarf star strips material from its companion star that piles up on the dwarf’s surface, eventually triggering a thermonuclear explosion.

The research is detailed in a paper published in the journal Nature Astronomy titled “Direct evidence for shock-powered optical emission in a nova.”

“This is a new way of understanding the origin of the brightness of novae and other stellar explosions,” said Elias Aydi, a research associate in MSU’s Department of Physics and Astronomy, who led an international team of astronomers from 40 institutes, across 17 countries. “Our findings present the first direct observational evidence, from unprecedented space observations, that shocks play a major role in powering these events.”

The SALT observations were taken under the transient follow-up programme, with Dr David Buckley at SAAO being the Principal Investigator. Nova became an important class targeted by the programme since 2016, led by Dr Aydi, who was a graduate student at the time. It now involves a number of different co-investigators from 3 of the SALT partners (South Africa, USA and Poland) plus many other international collaborators.

Astrophysical shocks form in a similar fashion to those formed by a supersonic jet aeroplane. When the jet exceeds the speed of sound, it produces a shock which leads to a loud sonic boom. In a nova explosion, the shocks produce light rather than sound.

When material blasts out from the white dwarf, said Aydi, it is ejected in multiple phases and at different speeds. These ejections collide with one another and create shocks, which heat the ejected material producing much of the light.

Another side effect of astronomical shocks are gamma-rays, the highest-energy kind of electromagnetic radiation. The astronomers detected bright gamma-rays from the star, known as nova V906 Carinae, whose explosion in the constellation Carina was first detected in March 2018.

Using NASA’s Fermi Gamma-ray Space Telescope, they showed that V906 Car had the brightest gamma-rays ever observed for a nova, proving that it hosts energetic shocks.

But the real surprise came because an optical satellite – one of the six nanosatellites that make up a collection of satellites operated by an international consortium called the BRITE constellation of cube-sats – just happened to be looking at the part of the sky where the nova occurred. Comparing the gamma-ray and optical data, the astronomers noted that every time there was a fluctuation in gamma-rays, the light from the nova fluctuated as well.

“We observed simultaneous fluctuations in both the visual and gamma-ray brightness, meaning that both emissions are originating from shocks,” said Kirill Sokolovsky, a research associate at MSU and a co-author on the paper. “This led us to the conclusion that shocks are indeed responsible for most of the brightness of the event.”

“We were lucky that members of our team were observing that part of the sky with these special satellites and were able to collect this unprecedented set of data,” Aydi said. “This allowed for continuous monitoring of the nova for 65 days, producing an unprecedented dataset.”

This new information may also help explain how large amounts of light are generated in other stellar events, including supernovae and stellar mergers, when two stars collide with one another.