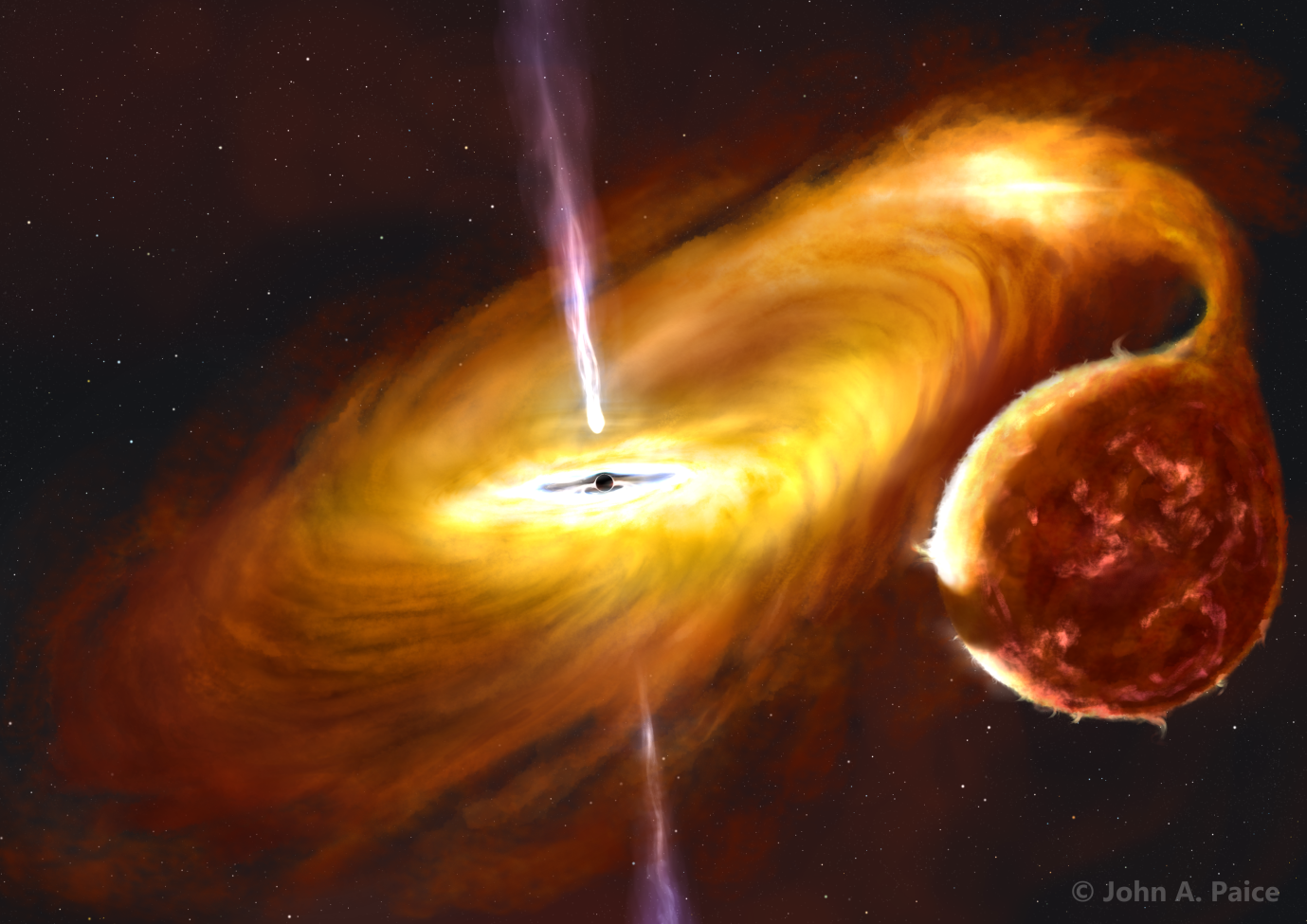 Posted at 14:13h in News, Press Releases by Daniel

An international team of astrophysicists from South Africa, the UK, France and the US have found large variations in the brightness of light seen from around one of the closest black holes in our Galaxy, 9,600 light-years from Earth, which they interpret as being due to a huge warp in its accretion disc. 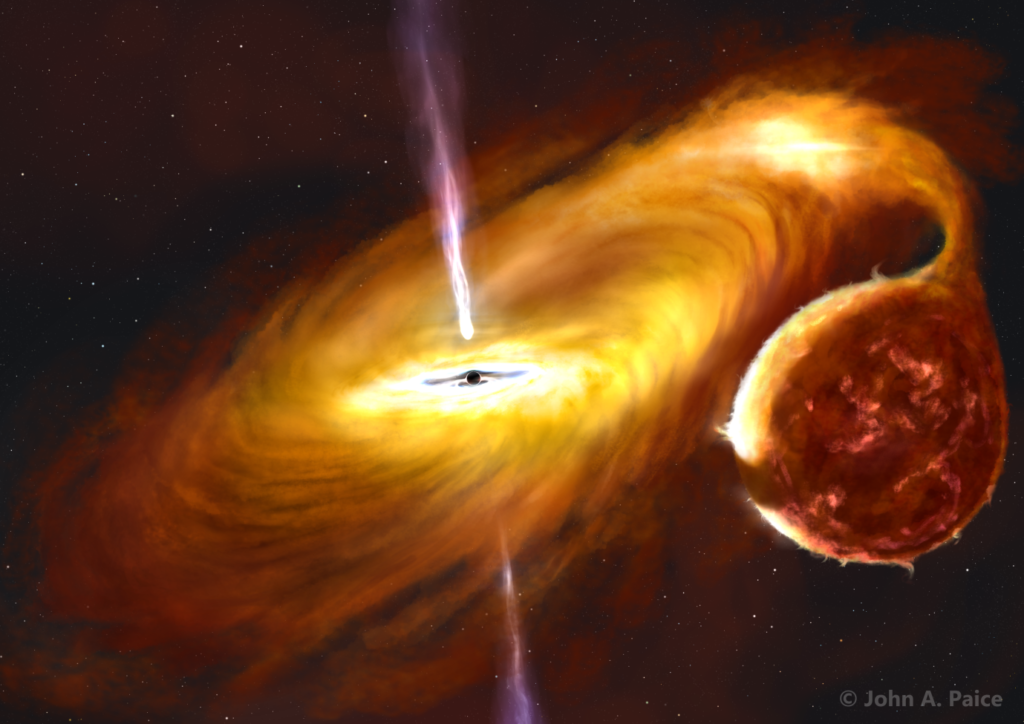 An artist’s impression of the black hole system MAXI J1820+070, based upon observed characteristics. The black hole is seen to feed off the companion star, drawing the material out into a vast disc of inspiralling matter. As it falls closer to the black hole itself, some of that material is shot out into energetic pencil-beam ‘jets’ above and below the disc. The light here is intense enough to outshine the Sun a thousand times over. ©John Paice

This object, MAXI J1820+070, erupted as a new X-ray transient in March 2018 and was discovered by a Japanese X-ray telescope onboard the International Space Station. These transients, systems that exhibit violent outbursts, are binary stars, consisting of a low-mass star, similar to our Sun and a much more compact object, which can be a white dwarf, neutron star or black hole.  In this case, MAXI J1820+070 contains a black hole that is at least 8 times the mass of our Sun.

The discovery presented in the paper was made from an extensive and detailed light-curve obtained over almost a year by dedicated amateurs around the globe who are part of the AAVSO (American Association of Variable Star Observers).  MAXI J1820+070 is one of the three brightest X-ray transients ever observed, a consequence of both its proximity to Earth and being outside of the obscuring plane of our Milky Way Galaxy. Because it remained bright for many months, this made it possible to be followed by so many amateurs.

Professor Charles explained, “material from the normal star is pulled by the compact object into its surrounding accretion disc of spiralling gas.  Massive outbursts occur when the material in the disc becomes hot and unstable, accretes onto the black hole and releases copious amounts of energy before traversing the event horizon.  This process is chaotic and highly variable, varying on timescales from milliseconds to months.”

The research team have produced a visualisation of the system, showing how a huge X-ray output emanates from very close to the black hole, and then irradiates the surrounding matter, especially the accretion disc, heating it up to a temperature of around 10,000K, which is seen as the visual light emitted.  That is why, as the X-ray outburst declines, so does the optical light.

But something unexpected happened almost 3 months after the outburst began when the optical light curve started a huge modulation – a bit like turning a dimmer switch up and down and almost doubling in brightness at its peak –  on a period of about 17 hours. Yet there was no change whatsoever in the X-ray output, which remained steady. While small, quasi-periodic visible modulations had been seen in the past during other X-ray transient outbursts, nothing on this scale had ever been seen before.

What was causing this extraordinary behaviour?  “With the angle of view of the system as shown in the pictorial, we could quite quickly rule out the usual explanation that the X-rays were illuminating the inner face of the donor star because the brightening was occurring at the wrong time”, said Prof. Charles.  Nor could it be due to varying light from where the mass transfer stream hits the disc as the modulation gradually moved relative to the orbit.

This left only one possible explanation, the huge X-ray flux was irradiating the disc and causing it to warp, as shown in the picture.  The warp provides a huge increase in the area of the disc that could be illuminated, thereby making the visual light output increase dramatically when viewed at the right time.  Such behaviour had been seen in X-ray binaries with more massive donors, but never in a black-hole transient with a low mass donor like this.  It opens a completely new avenue for studying the structure and properties of warped accretion discs.

Prof Charles continued, “This object has remarkable properties amongst an already interesting group of objects that have much to teach us about the end-points of stellar evolution and the formation of compact objects.  We already know of a couple of dozen black hole binary systems in our Galaxy, which all have masses in the 5 – 15 solar mass range.  They all grow by the accretion of matter that we have witnessed so spectacularly here.”

Starting some 5 years ago, a major science programme on the Southern African Large Telescope (SALT) to study transient objects has made a number of important observations of compact binaries, including black hole systems like MAXI J1820+070. As the Principal Investigator for this programme, Prof. Buckley, states “SALT is a perfect tool to study the changing behaviour of these X-ray binaries during their outbursts, which it can monitor regularly over periods of weeks to months and can be coordinated with observations from other telescopes, including space-based ones.”