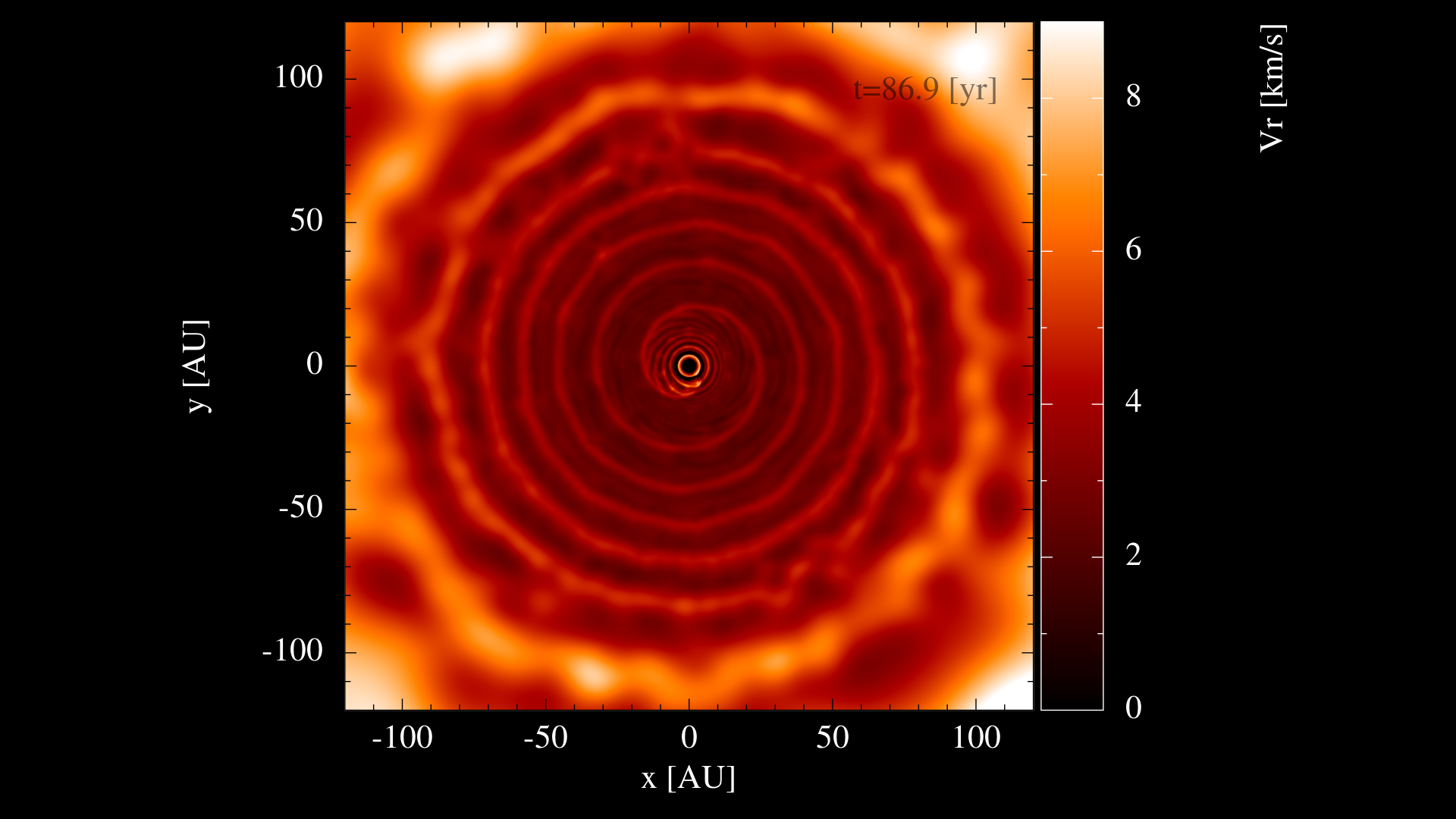 Posted at 09:58h in News, Press Releases by Daniel

A team of scientists from the South African Astronomical Observatory (SAAO), Michigan State University (MSU), and the University of Miami (UM) have created novel 3D simulations to investigate how dying stars interact with their environment and nearby planets.

The team created simulations of the interaction of red giant stars which eject dense outflows of gas and dust into their surroundings, on nearby companions such as planets and brown dwarfs. In this way, the team is able to study the effect of such close companions on the stellar outflow properties (e.g., its shape,  mass and momentum).

“Our simulations show that the interaction of the nearby companion with the stellar winds or outflows creates complex structures, such as spirals, arcs and bars”, said Dr Elias Aydi, a Research Associate at MSU and a former PhD student at SAAO, who led the study along with Prof. Shazrene Mohamed (UM and SAAO). “These simulations give us a peek into what the solar system might look like when our Sun turns into a giant star, in a few billion years from now”, Aydi said.

Animations of the computer simulations showing the interactions between a dying star and nearby substellar companions. Credit: Elias Aydi/MSU

At the end of their lifetime, stars like our Sun become unstable and expand in size, turning into red giant stars. During this phase, the extended outer layers are only loosely bound to the star by gravity, so the star loses a considerable amount of its mass through stellar winds. Our Sun is expected to turn into a giant star in a few billion years from now, likely expanding beyond Earth’s orbit, and swallowing the inner planets like Mercury, Venus, and our Earth.

At a certain point of the giant phase, a star with a mass close to that of the Sun experiences regular pulsations with periods longer than 100 days. These pulsations are actual expansion and contraction of the unstable atmosphere of the giant star, in an attempt for the star to regain its equilibrium. The brightness of the star oscillates due to the pulsations, showing an increase by a factor of 10 up to more than 100. The pulsations produce radial shock waves that travel through the circumstellar environment, similar to ripples propagating on the surface of a pond when we throw a rock in it.

“These shock-waves interact with the wake of the nearby companion producing even stronger, enhanced shocks — regions of abrupt change in velocity, temperature, and density,” said Prof. Mohamed. “The process is similar to what happens when ocean waves meet the wake of a speedboat, just more extreme.,” Mohamed adds.

The results of the simulations also show that if the companion travels around the star at a more extended orbit, it forms a single spiral structure created by its wake, but punctuated by undulations due to the pulsations. 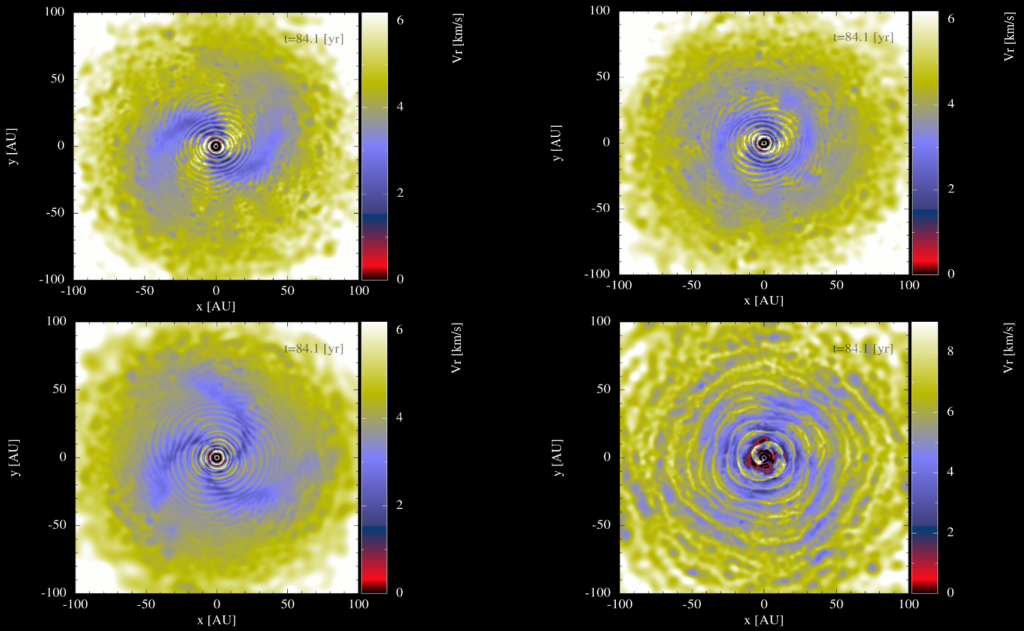 Fig 1: These images show four different possible patterns that could emerge around a giant star, orbited by a nearby giant planet. Each image shows a broad expanse of space — billions of miles across — with the star as a black orb at the centre. The companion is too small to see clearly at this scale, but it creates a visible wake behind it as it travels through the gas and dust that fill the circumstellar environment. The gas is coloured shades of green and blue, with green gas moving faster than blue. It’s in the green gas that we see different possible patterns: two-armed, three-armed, and four-armed spirals. Credit: Elias Aydi/MSU 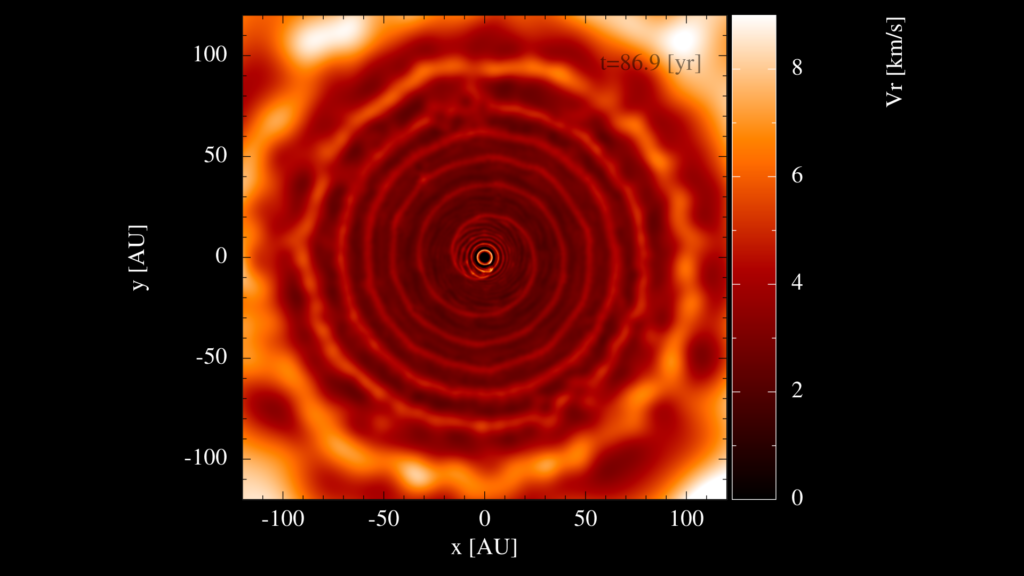 Fig2: If the companion ends up far enough from the star, a spiral with a single arm would be seen. Credit: Elias Aydi/MSU

The team used the smoothed particles hydrodynamic method, a computational method used to simulate the mechanics of fluid flows, to produce the simulations and simulate the interaction between the stellar pulsations with the nearby companion. “This is the first time such simulations are done in 3D and it took weeks up to months of computational time to run each one of these simulations on a super-computer”, Aydi said. A super-computer or a computer cluster is the equivalent of ~hundreds of computers working together, performing calculations to solve the fluid equations.” If we ran these simulations on a normal, commercial laptop or desktop instead,  we would have to wait thousands of years for an answer”, Aydi added.

When our Sun runs out of fuel in its core and turns into a giant, pulsating star, the stellar pulsation might interact with the giant, gaseous planets in our solar system, such as Jupiter. The team suggests that if Jupiter ends up in a nearby orbit around the future giant Sun and if there is a resonance between Jupiter’s orbital period and the solar pulsations, multiple spiral structures might form around the Sun. If Jupiter ends up in an extended orbit around the Sun, a single spiral arm might form.

While such multiple spiral structures have not yet been observed, single spiral structures have been observed frequently around red giant stars, but these are due to the interaction of the star with a more massive, binary star companion in a very wide orbit dozens of times the distance Sun-Earth. However, the team hopes that with current and future high-resolution and high-sensitivity facilities such as the Atacama Large Millimeter/submillimeter Array (ALMA) in Chile or the recently launched NASA’s James Webb Space Telescope (JWST), we might start observing such multiple spiral structures around giant, evolved stars.